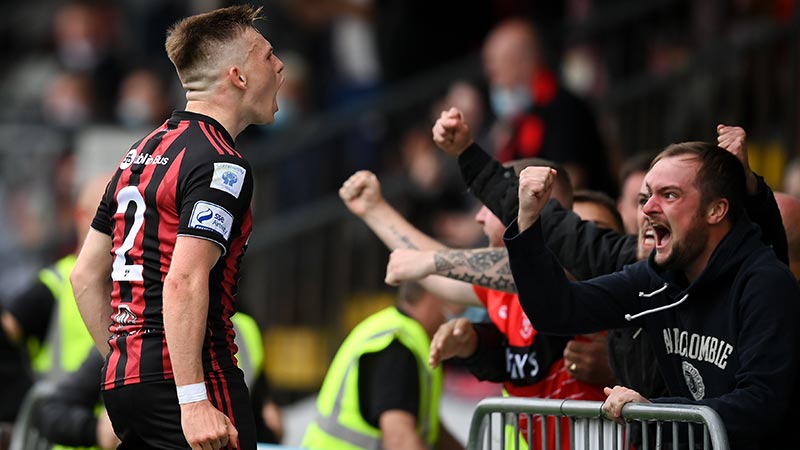 A stunning late Andy Lyons strike wins the Derby and sends Bohemians into the quarter finals of the FAI Cup after a 2-1 victory over Shamrock Rovers.

Both sides ended the game with ten men after Ronan Finn and Georgie Kelly were both dismissed late in the second period.

It was a high tempo start from the hosts with Dawson Devoy and Ali Coote seeing plenty of the ball early on but struggled to find that killer pass inside the Rovers’ final third. Stephen Bradley’s side slowly grew into the game and almost opened the scoring inside the first quarter of an hour.

Graham Burke and Aaron Greene linked up well inside the Bohs box and Burke’s left footed effort came agonisingly close but his shot rifled off the post and away. The teams went into the interval level with neither side able to make the breakthrough.

Keith Long’s side came out for the second half at a ferocious pace and Rovers struggled to keep up with the pace of Bohemians in the first ten minutes of the half. Bohs opened the scoring after Ali Coote’s sensational strike from 30 yards went into the top corner leaving Alan Mannus with no chance in the Rovers net.

Bohs dropped back deep in the final 15 minutes and conceded a free kick out on the Rovers right wing. Dylan Watts’ delivery was met by the head of Graham Burke who headed the ball into the path of centre back Roberto Lopes who fired home from close range to equalise for the visitors.

Bohs immediately went down the other end straight from kick off and almost went back in front through Ross Tierney who rattled the Shamrock Rovers crossbar before Ronan Finn challenged Georgie Kelly inside the area. Kelly reacted furiously at Finn sparking a brawl between both sides which inevitably ended in Kelly being sent off and Finn being shown a second yellow leaving both sides to play the final 10 minutes with 10 men.

Just as it looked like the game was heading towards extra time, Bohs full back Andy Lyons cut in from the right and beautifully fired the ball into the back of the Rovers net sending the Bohs faithful crazy. Bohemians progress to the final eight of the competition and will be hungry to bring silverware back to Dalymount Park after knocking the Premier Division champions out of the FAI Cup.