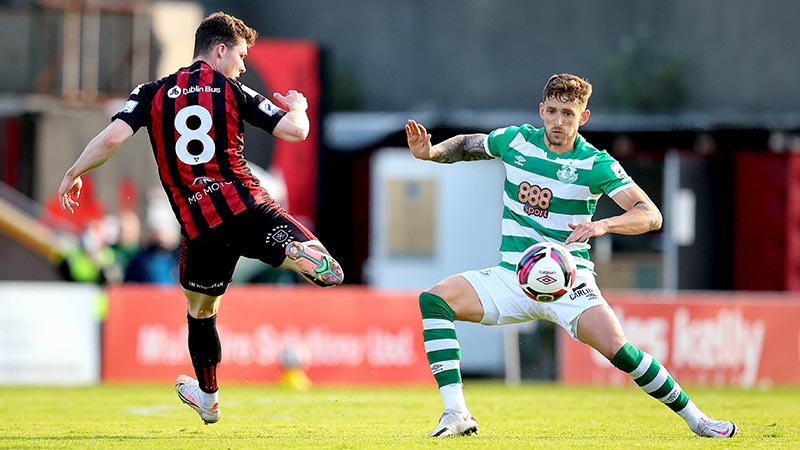 In a frantic and intense derby at Dalymount Park, Georgie Kelly scored yet again to secure victory for Bohemians over Shamrock Rovers.

The home side started the first-half well, but fell away. Rovers’ Rory Gaffney had chance after chance to put his team ahead, but failed to do so.

After four goals last time out, Kelly wasn’t going to miss an opportunity that came his way, as he spun away from his man and finished brilliantly into the bottom corner for the winner.

The Gypsies came out full of energy, raring to go for the Dublin derby. However, the work of Roberto Lopes and Sean Hoare stopped Kelly from getting any chances to score.

It was then the visitors time to attack. Gaffney sliced a shot well wide in acres of space in the box. Then Graham Burke hit the post, and Gaffney once again missed a chance, to leave Stephen Bradley wondering how his side weren’t ahead at half-time.

Bohs upped their game in the second-half, with plenty of energy and class from the likes of Dawson Devoy, Tyreke Wilson and Alistair Coote.

Then after some back-and-forth play, it was Kelly’s time to shine. Liam Burt carried the ball in midfield, and slid a pass into the feet of the powerful striker. Rovers’ Lopes got touch tight to him, but Kelly turned and held him off, before finishing low into the bottom left corner.

The Hoops came back at the home side, with shots from Burke and Mandroiu. James Talbot in the Bohemians net was sensational to pull off a string of saves to keep his side in front.

In spite of some periods of possession Rovers couldn’t get a grip on the game, with Bohs breaking up attacks and frustrating their rivals.

Without any ‘Bradley time’ magic, Shamrock Rovers have slipped to second in the table once again. Though it’s by goal difference, their up and down form will still be of great concern.

On the other side of the spectrum, Keith Long can be immensely proud of the performance his men put in. They dug in, looked dangerous on the attack, and with a striker like Kelly there’s always a chance of snatching a win. Bohs have the derby day bragging rights, and they deserve them.