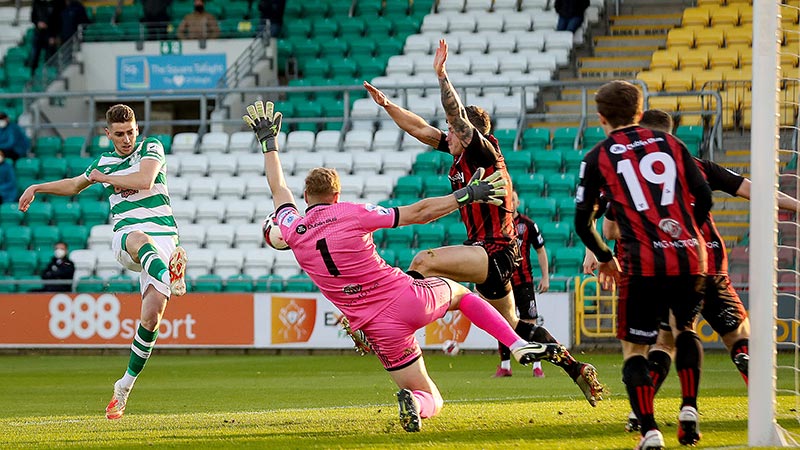 Shamrock Rovers claimed the first Dublin Derby of the season thanks to a Graham Burke penalty that Bohemians will feel to be harshly punished for at Tallaght Stadium tonight.

To compound matters, the Gypsies were reduced to 10-men after referee Paul McLaughlin sent off James Finnerty for the foul in the penalty area.

Dylan Watts got the home side off to the perfect start to haunt his former club after five minutes. Bohemians however would feel they were the better of the side in periods of the game with an excellently taken effort from Ross Tierney.

Both Liam Burt and Aaron Greene had a chance for their respective clubs to add further parity to their team's score-line, but the formers goal makes all the difference to ensure Shamrock Rovers maintain their unbeaten run to this season.

Danny Mandriou had the only opportunity of this game, as he broke free squaring the ball to the onrushing Burke, whose low effort was well saved by Talbot with his feet.

The next attacking phase in play saw the hosts take the lead, as the initial shot on goal struck the post and Dylan Watts was on hand to tap it home from close range to open the scoring.

Bohs responded that had a great chance as Keith Ward broke free down the right and he crossed into Burt, who with the goal at his mercy curled the ball wide.

Bohemians did score with a fantastic team goal; as Ward once again set up a phase of play that saw Ali Coote and Burt link up, with a deft cross to the back post headed calmly by Ross Tierney to equalise.

Aaron Greene had the perfect opportunity to put the home side again in front but his miss was glaring and his body reaction said it all.

Bohemians enjoyed various opportunities to put the away side ahead and despite the best chances Rovers were disciplined in their defensive qualities.

The best of the second-half chances for the away side was when Tierney sent in an excellent ball to Georgie Kelly, and his strikes hit the butt of the post and went wide. Bohemians would rue that missed chance as the flashpoint of the match came with just 15 minutes to play.

In what looked like a 50-50 clash in the area, James Finnerty was adjudged to have fouled, and the referee pointed to the spot. To make worse of the situation he saw that the foul warranted a red card. Now a man down Bohemians fell a goal down as Burke dispatched the penalty.

Bohemians put pressure on Shamrock Rovers, but their game management was excellent as their rivals huffed and puffed but couldn’t blow the house down.

There will be plenty to talk about this game but some will feel the penalty changed the tempo of the game as a whole.