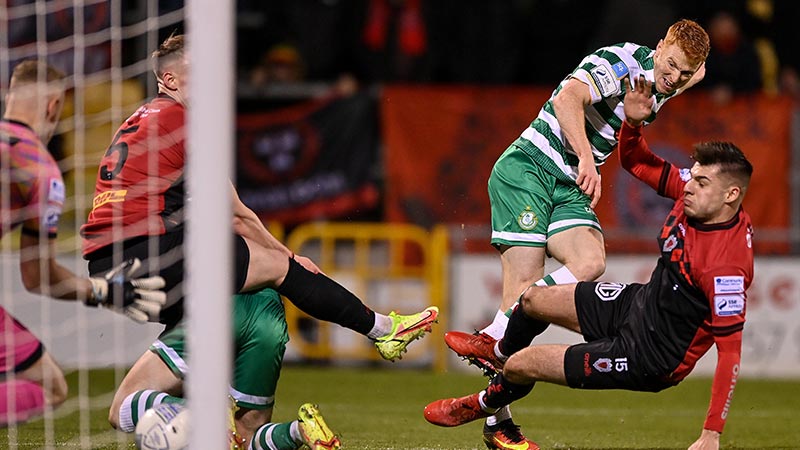 Rory Gaffney rattled the net 24 minutes into the Dublin derby to scrape Shamrock Rovers the bragging rights against Bohemians in a packed Tallaght Stadium tonight.

The goal surfaced when that very trio helped by Ronan Finn
were causing havoc on the right wing, a hazardous ball dropping to the captain who converted from the six yard box after a Ciaran Kelly mishap.

Ten minutes later a blocked Gaffney shot led to an opportunity for Watts but having had his original header collected well by James Talbot he was then called back for a handball.

Jordan Flores picked up a yellow card to take one for the team and stop a Byrne counter attack before the one minute of added time was elapsed and the sides went into the tunnel with 1-0 to the hosts on the scoreboard.

Bohs came out after the break all guns blazing and while Ryan Cassidy, Dawson Devoy and Flores’s best efforts early on Rovers began to control the game as the substitutions and yellow cards began to flow.

In that regard Sean Hoare, Lopes and Tyreke Wilson were all issued warnings, while Liam Burt, Aaron Greene, Barry Cotter, Danny Mandriou, Richie Towell, Jordan Doherty and Jamie Mullins all made appearances in the second half.

Mandriou in particular looked lively when he came on, forcing Talbot into a few saves as he ran ragged at Bohs’ defensive line.

Man of the match was awarded to Lee Grace as a stakeholder and solid option for the men in green and white throughout the game.

Next up Shamrock Rovers head to Oriel Park to battle it out with Dundalk FC, while The Gypsies have to rise to expectations of yet another capital city clash when they play out Damien Duff’s Shelbourne in Dalymount Park.