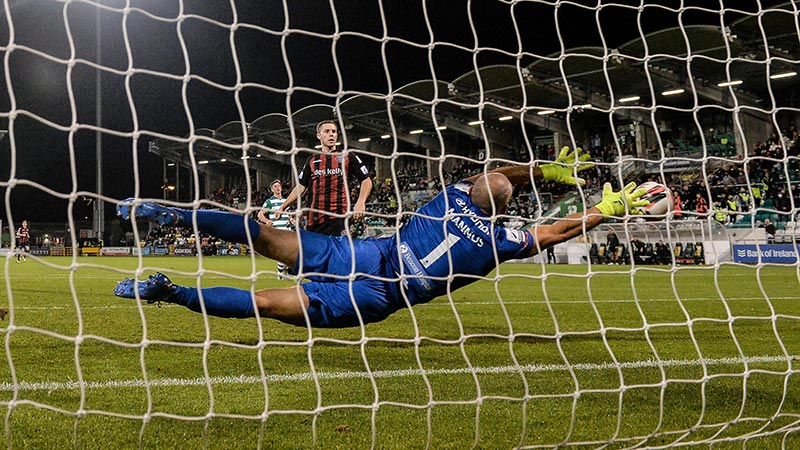 A Stephen McGuinness error gifted 10-man Shamrock Rovers a point in the Dublin Derby, as the Hoops drew 1-1 with Bohemians at Tallaght Stadium.

After a cagey opening, a fast Bohs break led to an open goal for Liam Burt, who slotted home to open the scoring.

Promise Omochere then raced through on goal looking to make it two, but Pico Lopes pulled him down and saw red for his trouble.

With the crowd behind them in the second-half, the Hoops tried to drag themselves back into the game.

Their luck turned as a tame Towell strike looped through the hands of McGuinness to nestle in the bottom corner.

Bohemians started the better of the two teams, passing the ball crisply and dominating possession, while the hosts struggled to gain a foothold.

Chances were few and far between, and it was the Gypsies who upped their game, crafting a couple of quality chances. Burt’s sizzling snapshot just missing the post, and Dawson Devoy’s curling effort palmed away by Alan Mannus.

The Hoops were floundering, and so the visitors took their opportunity. A delightful flowing move starting with Ali Coote on the right, moving to Omochere, and then Keith Ward, was finished with ease by Burt.

With the play continuing to favour Keith Longs men, Pico Lopes grabbed a handful of Omochere’s shirt while the forward moved towards the Rovers box. Referee Neil Doyle took his time, reached for the red card and sent the centre-half traipsing down the tunnel.

With it all to do in the second half, Rovers tried to up the tempo and get the home support roaring. They succeeded, with a Barry Cotter run and off-target shot prompting a swell in the noise level.

Bradley’s men seized upon this, and Richie Towell lined up a shot from a fair way out. The strike was straight at McGuinness, but the replacement ‘keeper let the ball through his hands and up over his shoulder into the net.

Cue an eruption of sound in Tallaght, and the Hoops had an unlikely lifeline.

The rivals traded chances into the last moments, when substitute Aidomo Emakhu found himself free as a bird, haring towards goal after a mistake from Rob Cornwall. It was McGuinness who would redeem himself, as the ‘keeper made himself big to prevent a winner.

Stephen Bradley’s men worked some magic again to grab a point in the derby. For Keith Long and Bohs it’s another disappointing result from a dominant position.