Bohs on top against rivals Rovers 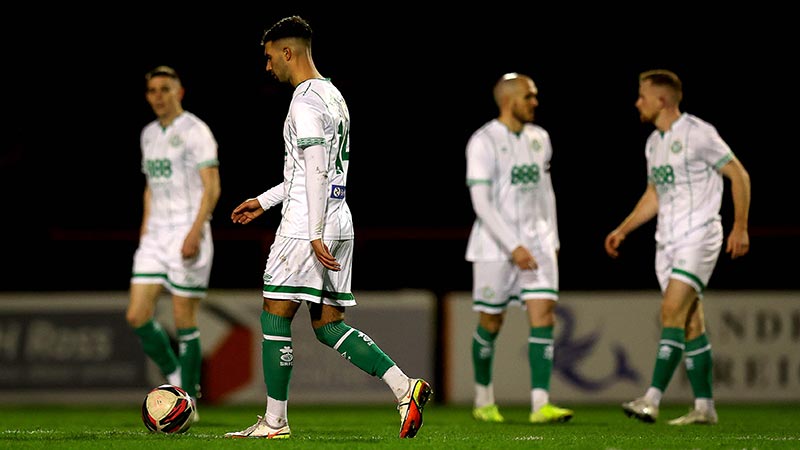 Bohemians take the bragging rights in the Dublin Derby, after they overcame Shamrock Rovers 3-1 at Dalymount Park, in tonight’s league meeting.

The Gypsies win their third derby of the year, as the city is painted red and black after the meeting.

Goals by Promise Omochere and Rob Cornwall helped them into a 3-1 lead, their opener coming from a Lee Grace own goal, while Daniel Mandroiu levelled for The Hoops.

This was a game with plenty of drama as both managers ended up being sent off, for an altercation after Mandroiu taunted the home support, the forward also getting a card in the process.

The opening half had plenty of drama, as an early own goal saw the hosts lead 1-0, before Mandroiu headed home to level in the 38th minute. This caused ugly scenes between the home support and Mandroiu, which ended with the forward getting a yellow card, with Stephen Bradley and Keith Long being sent off.

It was the home supporters who had the last laugh however, as Omochere and Cornwall found the net to make it 3-1. The never looked like giving up the lead in the second half as they powered to victory.

There were very few chances in the first half, before Ali Coote sent in a cross, which was met by two Rovers men and sent into their own net. Just four minutes later Mandroiu headed home from a Dylan Watts cross to equalise.

Omochere put Bohs back into the lead in the 43rd minute, he raced in to get onto a long ball, the forward then rounding the on rushing Leon Pohls, the keeper stranded outside his area as the young forward finished to an empty net.

It got worse just before the break as Rob Cornwall was on the end, of yet more poor defending by the Hoops, as he fired home a rocket inside the box. This caused wild scenes as they took a 3-1 lead into the break.

Bohemians controlled the second half as neither side, could get another goal on the scoresheet, the Phibsborough outfit celebrating in the capital tonight.