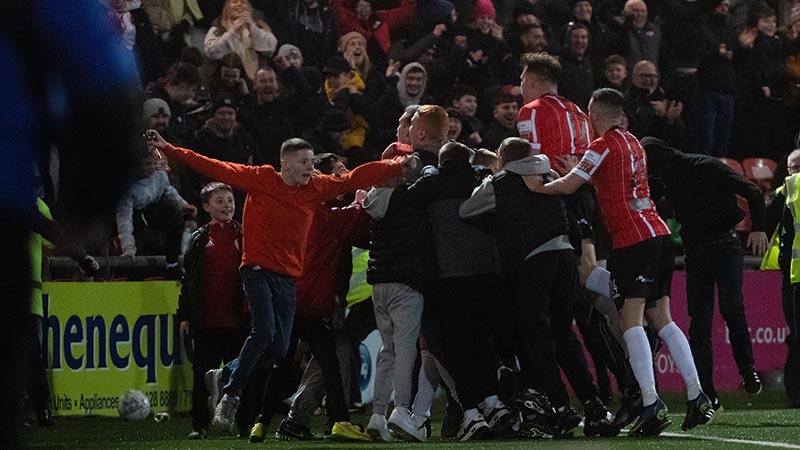 Will Patching and Dylan Watts provided the game’s other goals in a fiercely contested affair.

On a windy night in Brandywell 'The Candystripes' did not shy away from the challenge of facing the defending champions.

Ruaidhri Higgins’s men looked the better side in the opening 45 minutes despite the sides going into the break scoreless.

Just 10 minutes after the restart Jamie McGonigle was bowled over in the box by Jack Byrne. Will Pathcing sent Alan Mannus the wrong way to give City a well earned lead.

Derry continued to frustrate the defending champions by slowing the game down and sitting back. Rovers struggled to get into their groove. Jack Byrne’s delivery from set-pieces was nowhere near its usual high standard.

The Hoops flexed their immense squad depth with a triple substitution that saw Graham Burke, Andy Lyons and Dylan Watts come on.

It was Watts that proved to have the biggest impact of that trio when on 73 minutes the Rovers number seven curled a free-kick to level the score and inject some hope into Stephen Bradley’s side.

Those substitutes improved Rovers and they began to look the more threatening side, moving the ball quickly and playing with more urgency. Still The Candystripes remained stern and resilient in defence.

As the final minute of injury-time approached it seemed as though Derry would have to settle for a bittersweet point, until Rocardo Lopes botched a pass back towards his own goal.

This sent Jamie McGonigle through on goal, gliding past two Rovers defenders before sending the ball into the roof of the net and Brandywell into utter euphoria.

Derry finished the night on top of the table and now turn their attention to Monday when they welcome Sligo Rovers to Brandywell. The Hoops will look to bounce back at home to Drogheda United also on the same night.