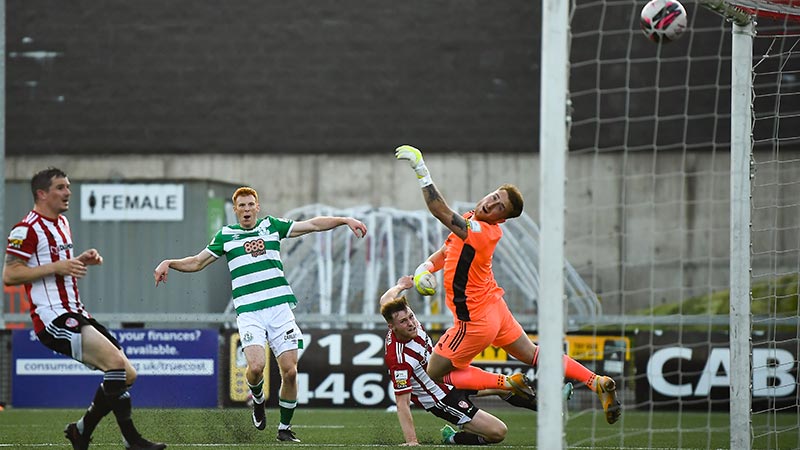 Shamrock Rovers were forced to work hard for all three points in their return to league action tonight, as they had to overcome a 2-0 deficit to come out 4-2 winners at the Ryan McBride Brandywell Stadium.

Goals from Graham Burke, Ronan Finn, Rory Gaffney and Richie Towell cancelled out first half strikes by Ronan Boyce and a penalty by Junior Ogedi-Uzokwe, despite midweek European action, the win now sees Rovers go top of the table by virtue of goal difference.

The home side were much the better team in the opening 45 minutes but a spirited second half performance by Shamrock Rovers ensured they would take the three points tonight; as they found their goal scoring form in a performance that showcases their worth as champions.

A shock looked on the cards midway through the first half, as Derry broke the deadlock in the 21st minute.

Will Fitzgerald ran into the box and squared the ball across the face of goal with defender Ronan Boyce, of all people; on hand to finish to the net from close range..

Just on the half hour, Derry doubled their lead as the referee pointed for a penalty when Roberto Lopes was penalised for a foul inside the area. Junior stepped up and left Alan Mannus no chance in saving the penalty as the northern side looked in dreamland.

Rovers had very few chances in the first half but managed to convert their first shot on goal as Graham Burke gathered a weak clearance in the Derry box and finished slow past Gartside.

The second half was all the way of the Tallaght side, Ronan Finn netted for the visitors in the 55th minute as Shamrock Rovers looked to have finally arrived into the game.

Just after the hour mark, Derry found themselves 3-2 behind as Rory Gaffney who came off the bench at the break, finished to the net with a spectacular effort as the Hoops were finishing the game on a high.

Richie Towell finished the goal scoring route for his side in the 74th minute, a fantastic link up between Graham Burke, sent him straight through the Derry defence as he made no mistakes finishing low to the net.