Gaffney and Burke on target for Rovers in Derry 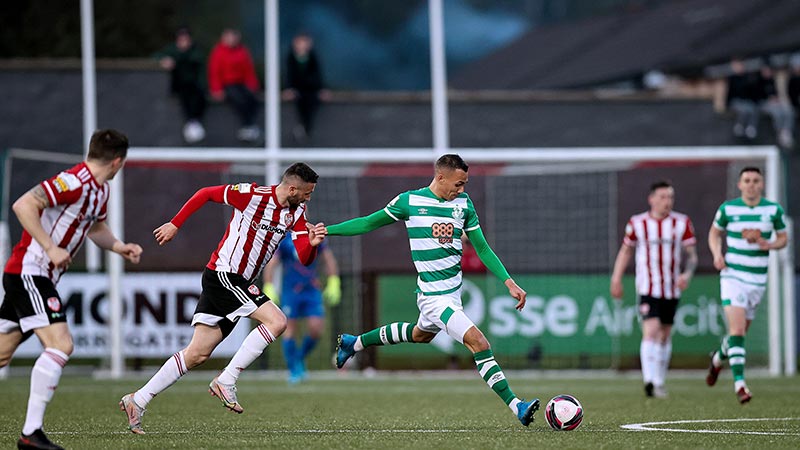 A brace of goals stretched Shamrock Rovers unbeaten league run to 26 games, as they accounted for the hosts at the Ryan McBride Brandywell Stadium.

While a Rory Gaffney opening goal had some fortune to it, the second could not be denied as a goal of real class, as Graham Burke lit up Foyleside.

The opening opportunity fell to Shamrock Rovers as O'Neill's high pass was nearly met by Sean Gannon, Gartside however, did well to gather it on the second attempt.

Derry City went closer when the ball was sent over the top and Sean Hoare under headed his pass back to Mannus and Parkhouse flicked the ball goalward but was denied by the outside of the post.

Graham Burke was next to test Gartside's handling as his low shot is well saved by the Derry keeper.

The opening goal came just after the half-hour mark as Rory Gaffney, who started ahead of Aaron Greene hit the onion-bag for the first time this season. This score arrived after Graham Burke hit a low curling effort that Gartside could only parry. The loose ball fell kindly to Gaffney at the back who slotted it home from close range after taking a slight deflection.

Burke wouldn’t have to wait long to get another opportunity and when it did, he made it count. Collecting the ball inside his half he looked up and spotted that Gartside was on the edge of his box, the strike from just inside the halfway line going over the keeper and into the empty net. The finish will be a goal of the season contender.

The second half was about game management for Shamrock Rovers who always looked threatening on the break. Burke once again broke free of the Derry defence and his low left-footed effort had to be gathered twice by Gartside. The next big opportunity for the away side fell to Danny Mandriou whom an excellent strike that forced a clever save from Gartside. Substitute Aaron Greene had an excellent chance following a clever one-two with Burke but his effort went wide for a corner.

Shamrock Rovers were clinical when they needed to in what was a deserved three points for the away side. For Derry - rooted to the bottom of the table, points are needed thick and fast as they face Drogheda next weekend.