Mandriou’s the Man for Rovers 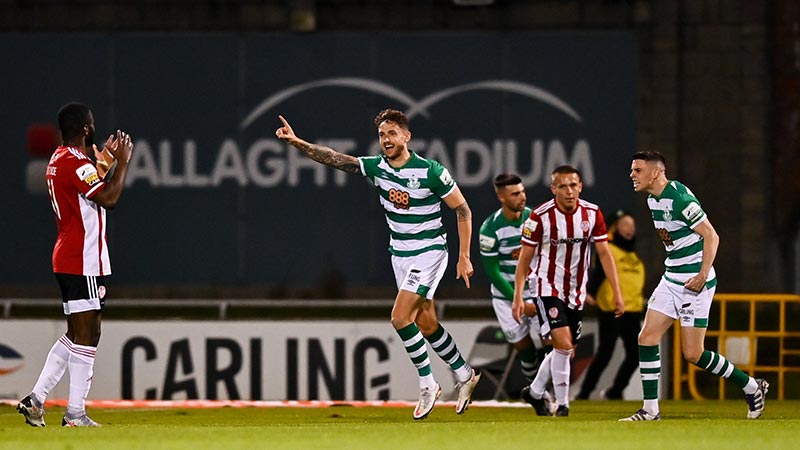 A fantastic finish by Daniel Mandroiu, just before the half time interval, helped seal all three points from Shamrock Rovers, as they recorded a 2-1 win over Derry at Tallaght Stadium tonight.

Derry broke the deadlock in the 6th minute, Danny Lafferty with a powerful header from a free kick. The home side equalised through a Lee Grace header, from a Ronan Finn cross.

It was Mandroiu again who proved the winner for The Hoops, after great build up by Barry Cotter, he found space in behind to find the target.

The game itself was decided in the opening half, all three goals coming before the half time interval, the second half was a cagey affair but one that Rovers controlled until the end, and could have added further goals.

The home side had the early possession but it was Derry, who managed to break the deadlock, as Danny Lafferty rose highest to head home a Jack Malone free kick.

The Hoops really put the pressure on after the goal, Nathan Gartside and the Derry defence doing well to deny chances. Against the run of play Alan Mannus had to be on hand, to deny Lafferty from close range.

The pressure told for the Derry defence, Ronan Finn played in a lovely cross to the area, Lee Grace was on hand to power home a header into the Derry goal.

Mandroiu made it 2-1 just before the break, Barry Cotter keeping the ball well and playing, Mandroiu who fired into the back of the net.

Lafferty had the first chance of the second half, but his header went wide of the goal. Gartside was on hand again to make a great save from Rory Gaffney.

A half of very few chances in truth as Roberto Lopes and Jamie McGonigle, both had goal bound efforts but neither could find the net.

Aaron Greene had a chance late on to make it 3-1, he combined well with Aidomo Emakhu, but he failed to hit the target. The win sees The Hoops sit nine points ahead, of second place St Patrick’s Athletic at the top of the table.