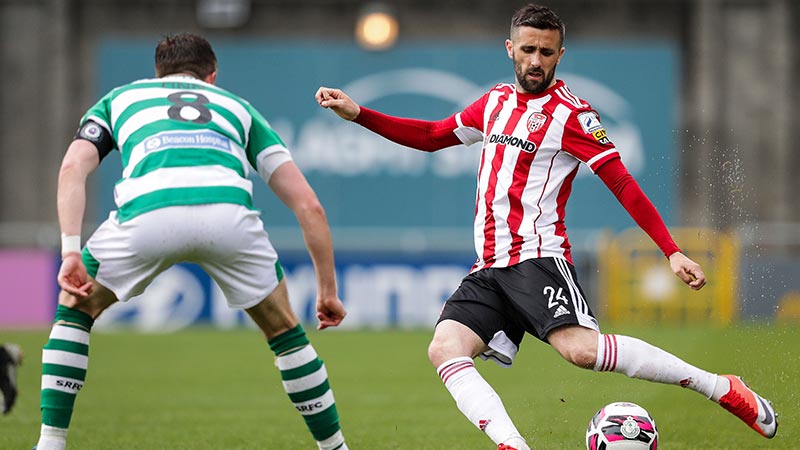 Ten-man Shamrock Rovers stretched their unbeaten run to 33 games with a 1-1 draw against Derry City at Tallaght Stadium this evening.

It was a cagey and scrappy affair in Dublin, in which the hosts had to come from behind after Will Patching gave Derry the lead.

Rory Gaffney’s tight-angled finish drew the scores level, and it would stay 1-1, despite a red card for both sides.

It felt as if the teams were feeling each other out a bit in the opening half. There weren’t many saves of any note for either ‘keeper to make. Rovers eventually became the dominant of the two, with a flurry of chances at the end of the half.

Gaffney had the best opportunity to score, as he sat down his marker and side footed a shot on goal. Nathan Gartside made himself big and prevent what seemed to be a certain goal.

The Candystripes were definitely in the game, with a few pacey breaks, but could they make the most of their chance to get at least a point?

In the first five minutes of the second period, it looked as if the visitors could snatch a victory. James Akintunde darted into the box and was clumsily brought down by Sean Hoare.

Will Patching sent Mannus the wrong way, and the Red and White Army were in the lead.

It wouldn’t take long for Stephen Bradley’s men to get their act together though. Liam Scales found Gaffney, who shrugged off a challenge at the far post and found the back of the net from an acute angle.

The final half an hour was very stop-start, and the defences for both sides were on top.

Sean Gannon would have the best chance, he raced in behind the defence to be one-on-one with Gartside. Unfortunately for him, he scuffed the finish straight at the away sides ‘keeper.

A second yellow card for Hoare threatened to make things interesting for the final ten minutes, but Derry seemed content with a point. The sending off of Lafferty just before time was up only cemented the result.

A fantastic, determined and well-fought draw for Ruaidhri Higgins’ men. However, for the Hoops, despite stretching their unbeaten run to 33 games, there were plenty of red flags in their performance.