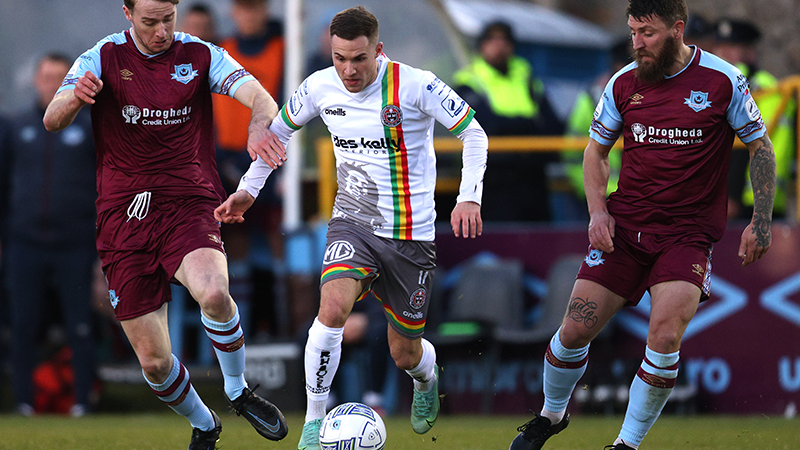 Dawson Devoy gave the visitors the lead in the opening ten through a penalty. Bohs bossed possession, but right at the death, against the run of play, Williams popped up to share the spoils.

Bohs got underway after being gifted a penalty in the fifth minute. Tyreik Wright sent in a cross which struck James Clarke on the arm.

There was absolutely no question over whether it was a penalty or not. Dawson Devoy stepped up and despite Sam Long guessing the right way, the ball flew in to give Bohs a 1-0 lead.

Drogheda had two half chances throughout the first half. In the 24th minute, a deflected cross found Poynton at the back stick. His effort was straight at Talbot however.

In the 33rd minute, Dayle Rooney slipped through Darragh Nugent and he floated in a cross/shot, but yet again Talbot did his duty and palmed it away.

Bohs throughout this half dominated the ball, keeping Drogheda to mostly speculative efforts aside from the aforementioned two. Yet they couldn’t seem to create any clear cut chances of their own.

This trend continued well into the second half. Bohs dominated possession, but had to take mostly speculative efforts themselves.

Perhaps their best effort of the second half came in the 51st minute, when Liam Burt cut inside and sent one towards goal. Sam Long got down well though to collect the effort.

Promise Omichere, was marshalled well by the Drogs defence tonight. He did manage to win a pair of free kicks around the 65 minute mark though, but neither was on target.

In the 73rd minute, Jordan Flores nearly pulled off the spectacular when he lined up an overhead to greet a floated cross. He couldn’t get the contact however and sent it wide.

With five minutes to go, Liam Burt sent in a low drilled cross with pace, but Junior Ogedi-Uzokwe couldn’t get the contact on that one. This proved costly.

With two minutes to spare, Drogheda substitutes combined when Dylan Grimes bombed down the left and went to the byline before pulling it back. Dean Williams met it and slotted it in to ensure a complete smash and grab for the hosts.

A result that could boost the Drogs. Bohs on the other hand will be absolutely furious that they couldn’t make all their possession count.