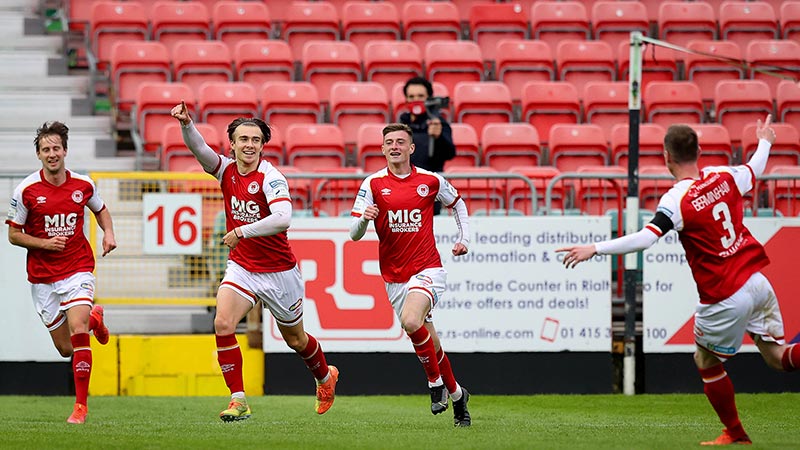 St. Pat’s returned to firm ground by confirming a 2-1 win against Bohemians at Richmond Park this evening courtesy of goals from Matty Smith and Robbie Benson, with very emotional final embers with one penalty for each side inside the last 10 minutes

This was a tremendous boost of confidence for the Saints, putting a stop on a sequence of two losses, and a heart-breaking outcome for Bohs who saw two balls coming off the crossbar.

This City Derby was of huge importance for both sides, and it was noticeable by the way the matters stayed tied up during the first moments; although the visitors had a crucial chance to take the lead in the ninth minute as Georgie Kelly smashed Jaros’s left post from the penalty spot.

It was Bohs who grabbed the reigns and came forward in the pitch, most of the time exploiting the left-wing.

The feeling of a derby remained much alive in the middle with both sides finding hard to dismantle the opponents web, resulting in no chances to score close to either goals until the break.

The Gypsies came on from the dressing room once again as the most dangerous side, with a lot of crosses sent in into Jaros’ box.

Billy King turned a cross into a very dangerous shot with 52 minutes on the clock, as the ball went off very close to the bar.

On the other side, Jaros denied Bohs first goal of the game with a brilliant save; from this point all the tactics were completely broken, with plenty of threatening plays for both nets.

Passing the hour mark, Sam Bone got booked due to a rough tackle on Ali Coote, and from the freekick the ball once again kissed the Saints bar.

Two minutes from death, the referee saw a foul in the St. Pat’s box, resulting in the second penalty of the game. From the spot, Dawson Devoy set the equaliser.

When it all seemed to point to 1-all draw at full-time, the third penalty of the game was given, with three of the five minutes of additional time gone; this time for the Saints.

In charge of confirming the second win of the season against Bohemians, the substitute Robbie Benson put it past the keeper setting the Richmond Park on fire.