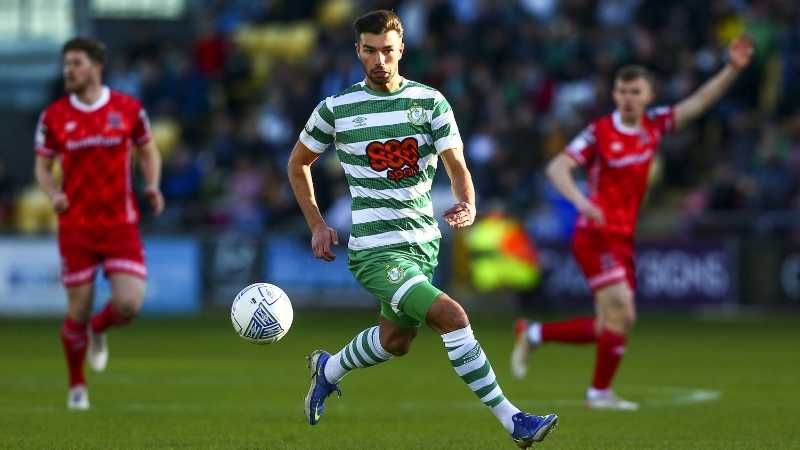 The persistence of Shamrock Rovers paid off as Danny Mandriou was the right man at the right moment to score the match goal at the Tallaght Stadium.

Both sides were frustrated at times and will reflect on missed opportunities to secure victory, but Rover's experience in carving out a goal opportunity at the crucial moment was just what Stephen Bradley's side needed to secure victory.

Shamrock Rovers conceded a free kick in a dangerous area, Keith Ward drove it in with a superb in-swinging shot, and Daniel Kelly was on ready to connect with the second ball, but his header cannoned off the crossbar.  As the half continued, the home side grew in stature and began to dominate possession. The best of those goal opportunities came when Sean Gannon's initial effort was just parried by Sheppard, and Dylan Watts' follow up seemed like it might sneak in at the back post but it just flashed wide.

Danny Mandriou would have a series of chances on goal, the best of which saw the Rovers midfielder's attempt on goal land inches wide of Sheppard's near post after an excellent burst of pace forward. Before halftime, the Lilywhites had a rare attack which saw Joe Adams put the ball into the area, where Sloggett left it for Kelly, who was on hand to attack Mannus' goal, but it was well stopped by the Hoops keeper.

Shamrock Rovers continued to press forward in the second half, and a Gannon cross was met in the Dundalk box, but that crucial touch was missing once again. The next player to put Sheppard to the test was Jack Byrne, who teed up a shot from the edge of the box, but the Dundalk goalkeeper was well placed to stop it.

The Hoops were rewarded for their persistence when Jack Byrne passed the ball in between the Dundalk centre-halves, where Mandriou seized onto the pass and placed it past the onrushing Shepperd to score the game's only and crucial goal.

Aidomo Emakhu, a second-half substitute, proved to be a thorn in Dundalk's side when he burst free of the Lilywhite defence and appeared poised to slide the ball past Sheppard, but it just went wide of the far post. He would cause bigger headaches as a foul by Gartland on the Rover’s front man would see him sent off and Mark Connolly would also enter the book failing to deal with the pacy forward.

A win that Shamrock Rovers were full credit for and for Dundalk manager Stephen O’Donnell it’s still no win against his former Arsenal teammate.