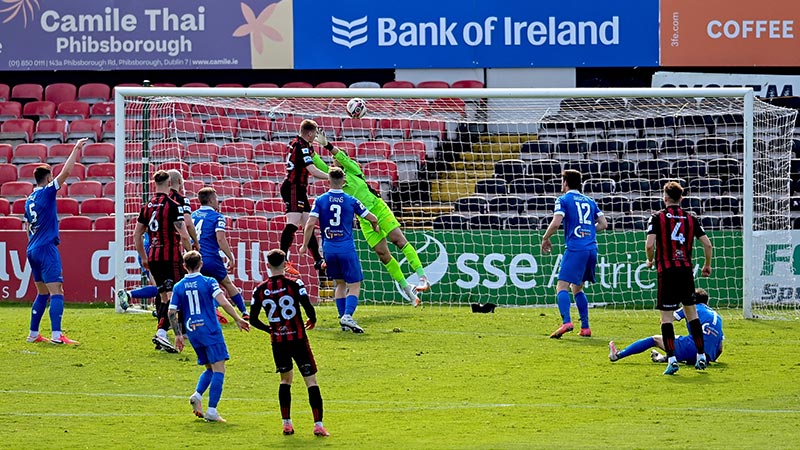 Goals from Dawson Devoy, Ross Tierney and Andy Lyons guaranteed a solid 3-nil win for Bohemians against Waterford in the SSE Airtricity Premier Division 1 this afternoon.

The Blues got reduced to their own half most of the time, without a single moment of lucidity upfront.

The Gypsies confirmed a remarkable change of fortune which started in early May, sticking their nose in now among the top-placed in the table ahead of the mid-season break; as they overtake Finn Harps in the classification.

On the other hand, The Blues remain rooted to the bottom of the table, as they welcome a needed break in the campaign to reorganize ideas with the new coach Marc Bircham.

The hype from the last recent results, especially the 5-1 from last week against Dundalk brought Bohs into the game eager to impress. Conor Levingston soon sent in the first warning from a free header as he saw the ball go wide off.

Brian Murphy came up with one of the saves of the season in the 14th minute, denying brilliantly Conor Levingston the first goal from the edge of the box.

Dawson Devoy sent in a very nice cross looking for Georgie Kelly, although quick enough to beat Cameron Evans as he sent it from a corner with a crucial slide.

The opportunities just kept coming for Keith Long’s boys; A long-range effort from Devoy went straight into Murphy’s hands before he chested a header from Georgie Kelly.

Devoy, one of the most inspired players for the home side, got his third chance to change the score as he saw the ball going slightly off the right post.

Three minutes are gone and Tierney headed in a loose ball from close range in a sequence of a corner to give Bohemians a deserved comfortable score before the break.

Bohs were fully dominating the run of the play in a one-way first half and saw Murphy holding Waterford to the game with another outstanding save, stopping Lyons’ effort from close-range.

The Marc Bircham’s crew looked for a reaction after the break, through the substitute Tshipamba’s, who left the blue outfit down to ten players after a late tackle on Ciaran Kelly.

Immediately Bohemians took advantage and made it three by Lyons as he finished an amazing teamwork play from left to the wing.

Waterford tried to step up looking for a reaction, but nothing too serious to bother Talbot, who didn’t make a proper save during the 90 minutes.