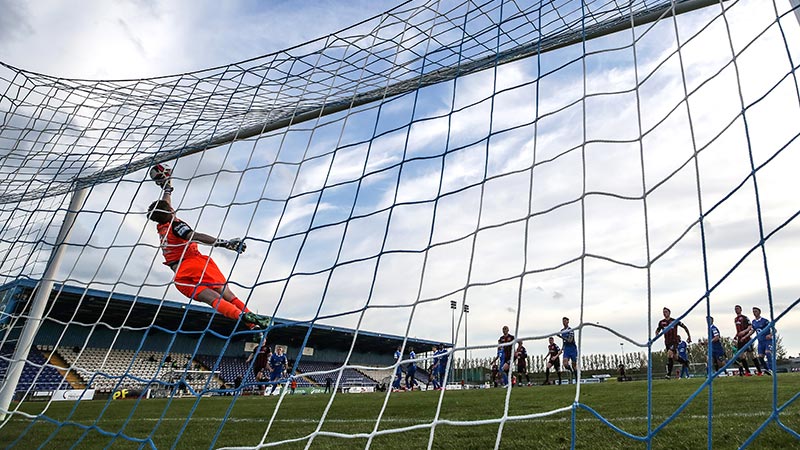 A Rob Cornwall goal after 43 minutes was enough to separate Bohemians and Waterford at the Regional Sports Centre in the Premier Division this evening.

The Gypsies were full value for their win, as they had the lions share of both territory and possession throughout the game.

Waterford rarely threatened James Talbot’s goal and will have few complaints after their second loss in-a-row.

Although the final score-line might suggest this was a narrow win for Bohs, in reality they were comfortable victors over a poor Waterford side.

The visitors were firmly in control of this game from start to finish and although they failed to convert their possession into goals Keith Long’s charges were full value for their win, which they got courtesy of a tap in from Cornwall two minutes before the break.

This game was a cagey affair early on with neither side creating any clear opportunities. Instead, the most notable chances were long-range efforts from Ward and Wilson on the Waterford goal but neither truly tested Paul Martin who was able to deal with both attempts comfortably.

Waterford for their part did try to get their danger man Daryl Murphy involved with some long balls but they were easily dealt with by the travelling defence.

The hosts were then hit with two hammer blows as the game edged towards half time.

With ten minutes to go in the half their target man, Daryl Murphy limped off after taking a knock and although he wasn’t immediately replaced, he was unable to continue and Waterford were forced to replace him with Prince Mutswunguma.

Murphy’s loss was compounded two minutes before the interval as the visitors struck to break the deadlock.

Waterford keeper’ Paul Martin could only deflect a Tyreke Wilson free kick from 30 yards into the path of the oncoming Rob Cornwall who graciously flicked the ball into an empty net to give his side the lead.

Four minutes into the second half, the Blues should have levelled. Mascoll’s cross was headed into the path of the unmarked Kyle Ferguson but he could only direct his header straight at Talbot.

This proved to be the best chance of the game for the hosts as they were forced to defend for long periods, coming under a lot of pressure from the likes of Burt, Kelly and Coothe but the Gypsies final ball often lacked the precision needed to double their lead.

Although Kevin Sheedy’s side pushed for an equaliser late on, they lacked the necessary quality and creativity to cause Bohs any issues.