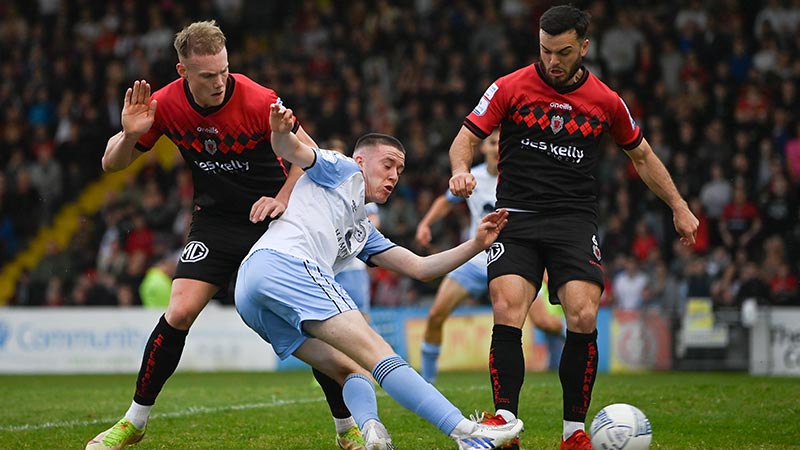 Ciaran Kelly saw red early in the second period but Keith Long’s men managed to hold out to go two points ahead of their Northside rivals.

It didn’t take long for the hosts to open the scoring. After just 13 minutes Dawson Devoy found himself in some space outside the box and managed to squeeze his effort past Brendan Clarke.

Damien Duff’s men had a decent 10 minute spell in which they pinned Bohs to the edge of their area but they failed to convert anything.

Clarke was called into action just before half-time when Shels were caught out playing from the back, but he managed to palm away Junior’s effort.

The second period began with drama when after just 50 minutes Ciarán Kelly dragged Shane Farrell to the ground, preventing a goal scoring opportunity and Kelly was given his marching orders reducing the hosts to 10 men.

When called into action Ryan stepped up to the occasion, denying Jad Hakiki from point blank range.

It would take until the final minute of normal time for the visitors to produce another chance.

Debutant Gavin Hodgins clipped the crossbar from close range after a great ball from the right-hand side.

Tonight’s result means that Bohs move to fifth in the table, two points clear of Shelbourne.

Keith Long’s men are also unbeaten against their neighbours up the canal, taking seven points from the three games they have played so far.

They will be in yet another Dublin Derby next week, travelling to Tallaght to face Shamrock Rovers.

As for Shelbourne they will try to pick things back up when they just Dundalk.