Quartet hit goals for Bohemians in win over Shelbourne 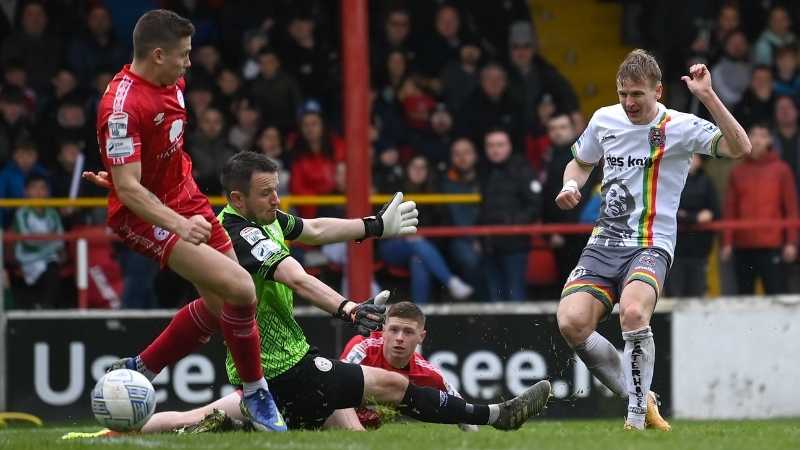 Seán Boyd levelled the score for The Reds in the first-half, but Damien Duff’s men failed to convert any of the countless other chances they created over the 90 minutes.

Liam Burt provided the game’s opening goal, with a lovely solo run ending in his shot being deflected, completely wrong footing Brendan Clarke in the Shelbourne goal who could do nothing to stop it from going in.

The lead did not last long and was cancelled out by a great header from Seán Boyd.

It looked as though Shels were going to snatch the lead right before the break when Adam Thomas was wide open in the six-yard box, but his header was straight at James Talbot.

Junior Uzokwe was fouled by Thomas in the Shels box just minutes from half-time. Dawson Devoy stepped up and blasted his penalty down the centre of the goal to give Bohs a 2-1 lead at the half.

Thomas would be involved in Bohemians’s third goal which came just five minutes after the restart. Ali Coote stripped the Shels midfielder of the ball and played it to Kris Twardek, who cut inside and slotted the ball past Clarke.

Just after the hour mark the final nail was put in the coffin. Burt again went on an incredible solo run and was denied one of the goals of the season by Clarke, however the ball fell to Uzokwe who tapped it into an empty net to make it 4-1.

Shelbourne would create glorious chances but failed to convert, with Seán Boyd and Jason McEneff both missing from close range in the final 15 minutes.

Today’s win is just what Bohemians will want heading into Friday night’s Dublin Derby at home to Shamrock Rovers.

As for Shels, they will have to wait a while before returning to Tolka Park as they travel to Oriel Park on Friday to face Dundalk.