Shelbourne extend their lead at the top 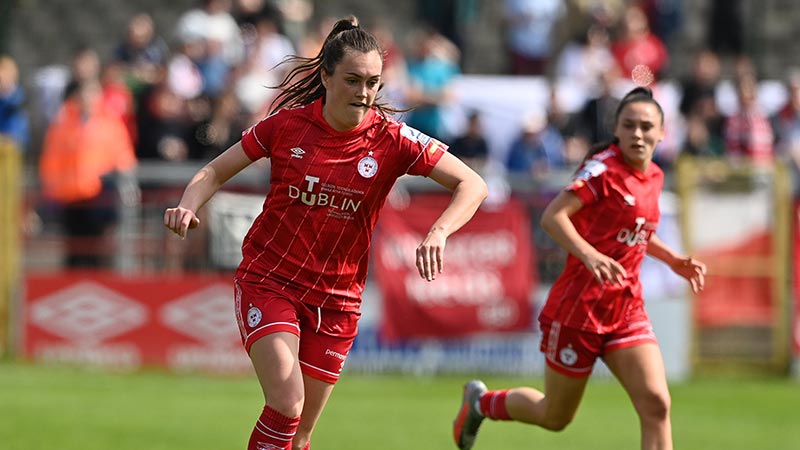 Shelbourne took all three points from Dalymount with a 3-0 win over Bohemians courtesy of goals from Saoirse Noonan, Jess Ziu and Noelle Murray.

Bohs started the game well, the opening 10 minutes were fairly even and they started to edge their northside neighbours.

Lisa Murphy provided the game’s first chance when she hit the outside of the post from a free-kick.

After the 20 minute mark the defending champions started to find their rhythm.

Rachael Kelly was kept busy in between the sticks for Bohs, making a good save down low to deny Saoirse Noonan from close range.

There was nothing Kelly could do a few minutes later when Noonan latched on to a cross from Noelle Murray to flick the ball with the outside of her boot into the roof of the net giving Shels the lead.

Pearl Slattery looked certain to double their lead when a goal-line clearance fell to her inside the six yard box but the Shels captain failed to find the target.

The hosts had a slight flurry of chances at the end of the half but Amanda Budden kept Erica Burke’s close range effort out to keep Shelbourne’s lead intact at the break.

Their lead would eventually be doubled right before the hour mark when a Keeva Keenan throw-in somehow found its way to an unmarked Jess Ziu who finished the easiest chance of the game.

Noelle Murray got the third a few minutes after Ziu’s goal. Jess Gargan clipped the ball into the box from the right for Murray to control and then smash past Kelly.

Tonight’s result helps Shelbourne extend their lead at the top of the table especially with Peamount dropping points.

They will look to continue their exceptional form this season when they host DLR Waves next week.

As for Bohs, they travel to Galway next week to try and bounce back from tonight’s defeat.