Shels cruise to win over Bohs 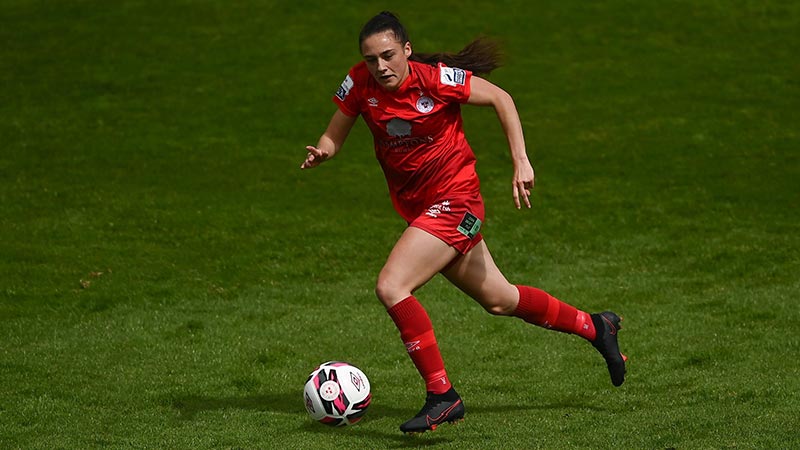 Shels cruised to a 3-1 victory over their North Dublin neighbours Bohemians at the Oscar Traynor Centre this afternoon.

Jessie Stapleton and Jessica Ziu (2) got the goals for the visitors. Lisa Murphy scored a wonder goal for the hosts, but it wasn’t nearly enough.

There were half chances in the opening minutes, but offsides or decent defending kept the visitors at bay.

In the 22nd minute the breakthrough came. Ziu was played through on goal and made no mistake, slotting it right past Courtney Maguire. This would be the first of two for Ziu.

Shels sought a second for the rest of the half but couldn’t find it. Lisa Murphy denied Ciara Grant superbly in the 31st minute after Grant rounded Maguire but was forced outside by Murphy.

The second half started and the game followed the same fashion. Ziu should’ve had another in the 52nd minute after Noonan played her through, but she attempted to dink Maguire one on one and the Bohs shot stopper collected the effort with ease. It was a case of simply overthinking it from Ziu.

Over the coming minutes a second felt inevitable. Saoirse Noonan had a pair of chances but couldn’t find the net. It would be Jessie Stapleton who made it two for Shels.

In the 62nd minute, Ziu played a ball to Noonan. Noonan allowed the ball to keep rolling and Stapleton met it first time and curled it in from the edge of the area. A fine finish to put this out of Bohs’ reach.

In the 72nd minute, a bolt from the blue occurred. Lisa Murphy, who had displayed some great defending throughout, got the ball just inside her own half. She audaciously tried her luck and only found the net, ensuring her side stayed in it with what is surely the goal of the WNL season.

Shels ensured that this would not mean they were to drop points however and it was Jessica Ziu who ensured the points.

Six minutes after Murphy’s wonder strike, Shels earned themselves a corner. The ball came in and Courtney Maguire, who has been consistent all season, dropped her attempted catch. Ziu was on cue, in the right place at the right time to tap it in.

This ensured Shels claimed the points. It also wraps up a clean sweep of their neighbours this season, winning three of three against Bohs.