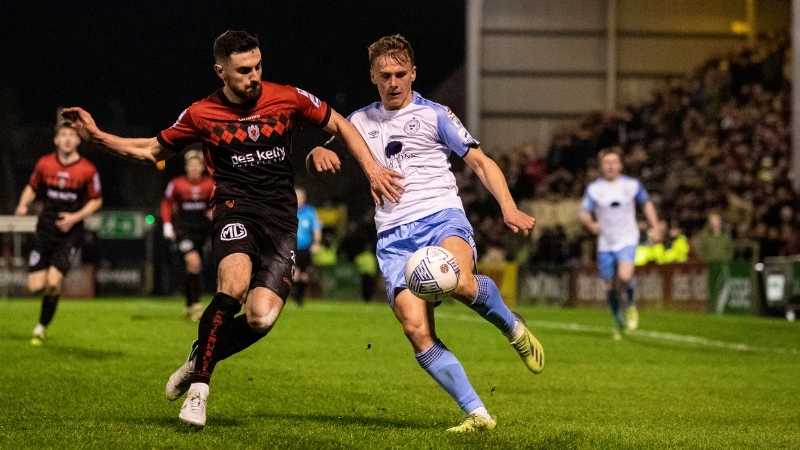 Grant Horton rescued a point for Bohemians at Dalymount tonight, cancelling out Seán Boyd’s goal for Shelbourne as the north Dublin derby ended 1-1.

A tight and tense affair in Phibsborough didn’t come to life until the final 15 minutes when Boyd scored less than 30 seconds after coming on. Horton would cancel out his goal five minutes from time.

Those 75 minutes prior to Boyd’s opener were for the most part uneventful but there were glimmers that belonged to the hosts.

Ali Coote and Dawson Devoy pulled the strings in midfield for Bohs and it was Coote that produced their first real effort. A long range shot that was an easy catch for Lewis Webb.

Webb would be tested later on this time by Jordan Flores. His volley inside the box forced the Reds’s goalkeeper into a good save at his near post.

Rory Feely would go close with a header from a corner but he failed to find the target.

James Talbot was left with next to nothing to do in the Bohs goal as the sides went into the break scoreless.

The slow start of the first-half carried over to the second, but again it was the hosts that looked the stronger side. Coote once again at the heart of everything they did.

However, it would be Damien Duff’s men that managed to break the dead-lock.

Sean Boyd was only on the pitch for 30 seconds when he found himself on the end of a Shane Farrell pass before calmly rolling the ball past Talbot to put Shels 1-0 up with 15 minutes left to play.

It seemed as though Shels were on course for their first win at Dalymount since 2017 however five minutes from time Grant Horton managed to find the back of the net from close range after a goal mouth scrap following a corner.

Neither side was able to find a winner in the time that remained and they shared the spoils.

Shels now turn their attention to Friday when they welcome Finn Harps to Tolka Park.

As for Bohs, it’s another Dublin derby when they travel to UCD.