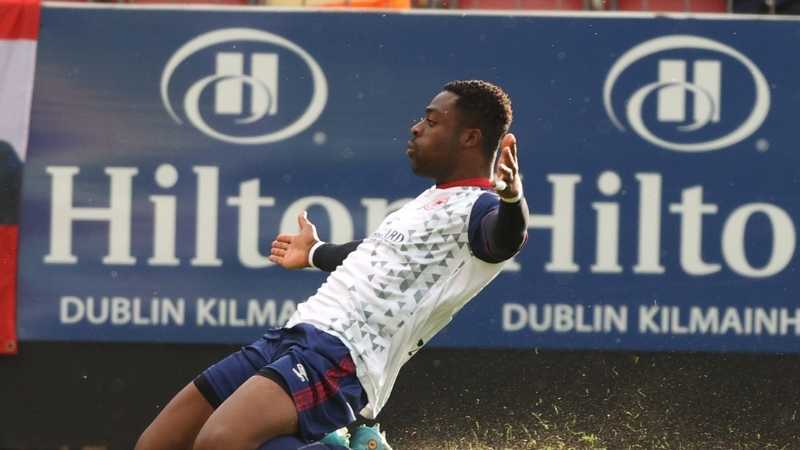 It was the Tunde Owolabi show as St. Patrick’s Athletic beat Bohemians 3-0 at Richmond Park.

Two brilliant strikes finished off with a lovely penalty kick saw the striker score his first hat-trick for the club.

It didn’t take long for the first half to ignite. Both sets of players were flying into tackles looked right up for the derby.

The Saints opened their account after four minutes when Sam Curtis received the ball on the right-hand side and played a ball down the line to the onrushing Owolabi.

It looked to be a routine clearance from Ciarán Kelly however, a vital slip from him allowed Owolabi the unlucky chance to carry the ball into the Bohs penalty area. Instead of squaring it to Chris Forrester, he put the head down and fired the ball into the far corner past the helpless James Talbot.

After the early goal, the visitors began to grow into the game. It was Dawson Devoy who was heavily involved in all the good things that Bohs were doing, and the away side created numerous chances. Promise Omochere had a header from a corner that whisked past the post.

A strike from Devoy had to be pushed over the bar by Anang after a deflection. Anang was proving to be the Saints hero during the first half as he produced numerous saves to keep his side ahead. The pick of the bunch came from a Jordan Flores strike on the half hour mark that he pushed away.

The Saints should have made it two after that. A well-rehearsed freekick was delivered perfectly to the back post but Grivoti fired over from five yards out. However, the home side got their second right on half-time when Forrester reversed the ball to Owolabi on the left-hand side. He swivelled on the turn and struck it greatly into the far corner.

The Saints started the second half well but couldn’t create anything clearcut. The game was all but over when Sam Curtis who was brilliant all evening raced down the right before playing a one-two with Owolabi.

The fullback played it across to Eoin Doyle who after some lovely footwork was brought down by Kelly. Owolabi stepped up and made no mistake, finishing into the keepers bottom right for his hattrick.

Bohs failed to create anything after that, and Pats ran out comfortable winners. O’Reilly in particular in midfield was instrumental in the result, putting himself all over the pitch. It was a much needed and better performance from the home side after Friday’s defeat to Shels.

Bohs will need to regroup before they host Drogheda United at Dalymount this Friday. For the Saints it is a tricky journey away to Dundalk.