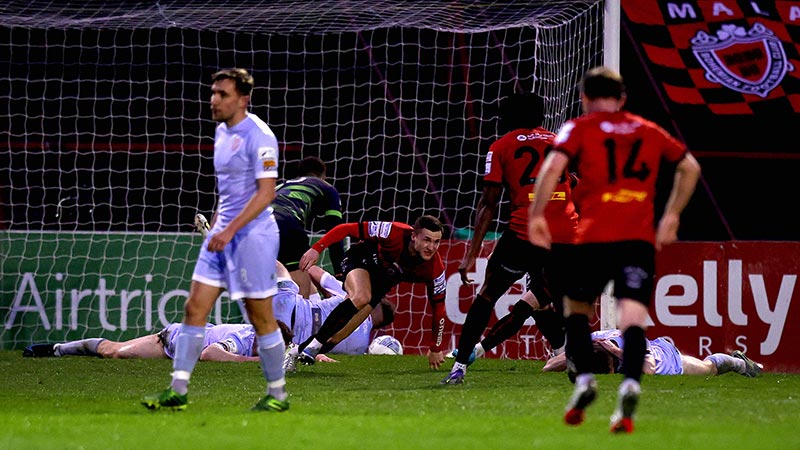 James Akintunde’s injury-time header kept Derry City’s 100% record alive as The Candystripes beat Bohemians 2-1 at Dalymount in a hard fought game which saw them go a goal behind thanks to a great move capped off by Liam Burt.

Ronan Boyce would level the score for the visitors in the second-half which swung the momentum of the fixture after Bohs started so strongly.

Bohs were exceptional in the first-half, playing at a frantic pace, pressing Derry and putting their defence under pressure.

Grant Horton came close early on with a long range effort that almost caught Brian Maher off his line but he was able to palm the strike over the bar.

Tyreke Wilson nearly curled in a free-kick a few minutes after.

The Gypsies would get the opener after 20 minutes when Liam Burt, Ali Coote and Promise Omochere all combined before Burt finished off what was a brilliant team goal.

Just after Burt’s opener,Omochere had a header go wide and Jordan Flores forced another good save from Maher. Bohs lead 1-0 at the break.

They failed to start the second half with the same intensity that they had done in the first.

The Candystripes began to find their feet and were rewarded just after the hour mark when a Cameron McJannett cross found the head of Ronan Boyce who levelled the scoring.

Derry began to get on top after Boyce’s equaliser and sloppiness and frustration grew in the Bohs performance.

A wayward attempt at a clearance from Rory Feely looped over James Talbot who just about managed to slap the ball off the line.

Liam Burt was presented with Bohemians’s best chance of the second-half when he ran through on goal but did not manage to get any power in his effort against Maher.

It seemed as though the spoils would be shared until substitute James Akintunde headed home a free-kick with the last kick of the game to snatch all three points for Derry.

City remain on top of the table with their 100% record. They return to Dublin on Monday when they face UCD.

As for Bohs, they travel to The Showgrounds on Tuesday to face Sligo Rovers.