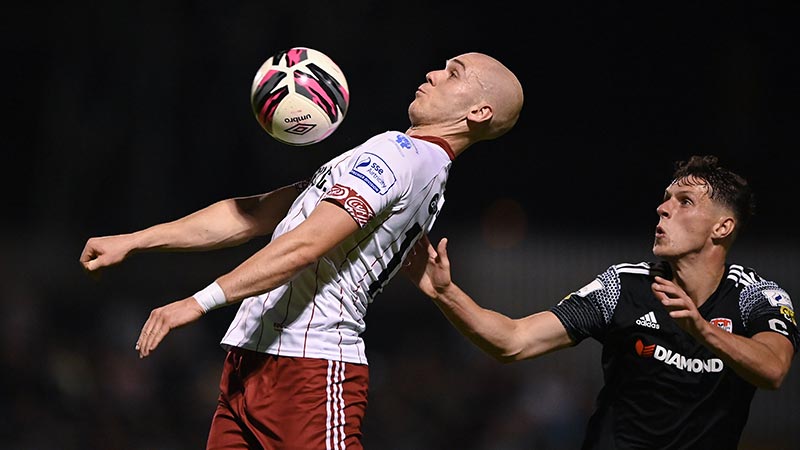 A late Georgie Kelly goal, helped to salvage a point for Bohemians, as they played out a 3-3 draw with Derry City, in tonight’s meeting in the SSE Airtricity League at Dalymount Park.

Liam Burt got the opener for the home side, before Jamie McGonigle equalised in the 63rd minute. Junior added second half effort. James Akintunde's 91st minute effort looked like the winner, but it was Kelly yet again who found the net for Bohs, to salvage a point as he added his second of the match.

It was a chaotic night of events at Dalymount Park, of the six goals scored, five came in the final half hour of the tie, honours even it finished as Sligo now enjoy a six point cushion over Derry.

The visitors were the first side to threaten, an early effort toward goal, that required Dawson Devoy to head the ball off the line.

From their first chance at goal, Bohs took the lead, Liam Burt with the strike from outside the box, which nestled into the top corner, as Georgie Kelly provided the assist.

It was all Bohemians for the remainder of the half, despite Derry having chances, they were kicking themselves not to have added a goal, Burt had another chance but Nathan Gartside saved well in the Derry goal.

Gartside was called into action just minutes after the restart, Kelly with the goal bound effort, but the Northern Ireland underage international goalkeeper, did well to deny him.

McGonigle hit the mark in the 62nd minute, as he scored a cracker to equalise. Junior would add their second, less than 15 minutes later, he managed to bundle home a header from close range.

As the home side needed to come back into the tie, Kelly was again on hand to power home a header in the 80th minute.

We would have a further two goals however in additional time, James Akintunde breaking into the Dubliners area, before firing past James Talbot.

Keith Buckley’s side threw the kitchen sink at it during the final few minutes, with Kelly again the main goal scorer, as he broke into the area and hit a rocket into the top of the Derry goal, to send the stadium into pandemonium.