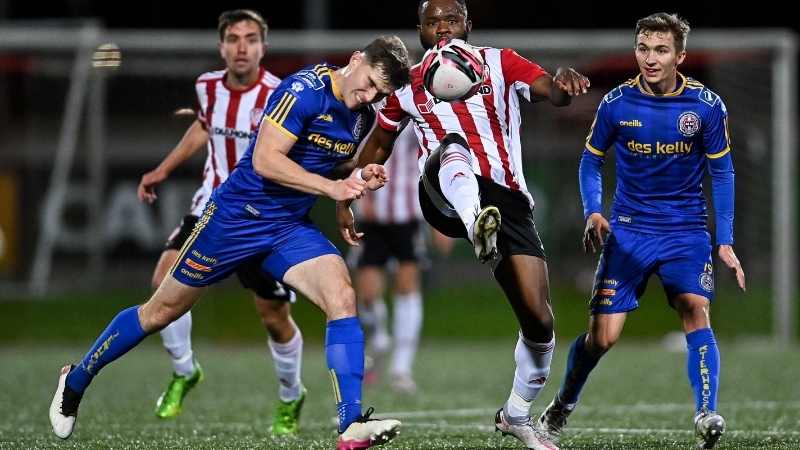 With better finishing or simply more composure in the final third, they would've had a three-goal cushion to protect at half-time.

Such was their early dominance, Jamie McGonigle had multiple sights of goal in the first-half while wingers James Akintunde and Junior Ogedi-Uzokwe were frequently dangerous.

Instead, Keith Long's men went into the interval happier with their work and punished their hosts' profligacy without hesitation. On a night where in-form goalscorer Georgie Kelly was a notable absentee for the visitors, Promise Omochere proved a worthy replacement in attack.

His problematic pressing helped them break the deadlock out of seemingly nothing, four minutes after the restart. He shrugged off a challenge from one defender, ghosted past another and fired low into the bottom corner beyond goalkeeper Nathan Gartside.

Despite the initial shock of conceding, Derry didn't let their heads go down. Instead, they were more urgent in their play and the increasing pressure eventually told despite Bohemians winding down the clock in what soon became a stop-start affair littered with cynical fouls.

Ogedi-Uzokwe showed great flexibility and somehow hit the woodwork in the area with a defender all over him, before Cameron McJannett had a genuine penalty claim waved away by referee Damien MacGraith after being pushed as he lurked intently towards the far post.

However, the hosts had Eoin Toal to thank for keeping the score 1-0 with brave defending on the line as Gartside's miskick almost proved costly.

His spatial awareness seemed off all night long and the 23-year-old was caught out in possession on a handful of occasions, leaving manager Ruaidhri Higgins and the home fans holding their breath at times.

Ultimately, they'll go home thankful their unbeaten home run has been extended to six, despite losing ground on Sligo Rovers in the European race after results didn't go their way elsewhere tonight.