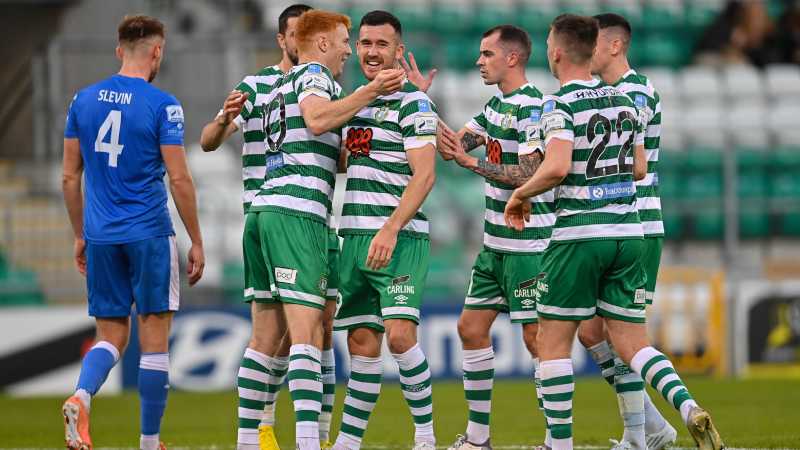 The clash of top vs bottom went very much to script this evening as Shamrock Rovers extended their league lead by putting five past a sorry Finn Harps side in Tallaght.

Farrugia put the hosts ahead early on, and a flurry of goals in the last ten minutes of the first half from Gaffney, Lyons, and Farrugia once more had this game well and truly over before the break.

The Hoops are preparing to travel to Belgium on Tuesday to face Gent in the Conference League in high spirits as they’ve extended their lead at the top to four points once more, also having a game in hand on Derry in second.

Shamrock Rovers controlled the ball right from the off and made their early pressure count just before the 10-minute mark. Jack Byrne held the ball at the edge of the area and played a slick back heel pass to Andy Lyons who saw his curling shot saved by McKeown but the ball fell to the feet of Farrugia just 8 yards out who slotted into the gaping net to give the hosts the lead.

Harps' ill-discipline early in the game did not help matters either. McWoods and Duncan were both shown yellow by referee Derek Tomney for two cynical fouls inside the first 15 minutes of the match.

Shortly after the half hour mark Rovers made it two. Rory Gaffney floated a cross into the box that caused Ryan Rainey to barge through Greene, leaving the ref no choice but to point to the spot. Rory Gaffney stepped on and drilled the spot kick low and hard into the bottom left corner to double the hosts' advantage.

Rovers put the game to bed moments later as they made it three. August Player of the Month Andy Lyons smashed home into the roof of the net after some great play down the right-hand side that led to Gaffney laying off to Lyons at the edge of the area.

It was four for Shamrock Rovers just three minutes after their third. Farrugia once more scored from close range, this time off his left foot but it was all made by Jack Byrne whose incredible eye of the needle pass split the defense and found Farrugia one on one with McKeown.

Serdeniuk came off the bench at the break to make his Rovers debut along with Emakhu, as they took the opportunity to give Lyons and Greene some well-needed rest ahead of their constant busy schedule.

Jordanian International Jaime Siaj got one back for Harps just before the hour mark. McWoods played a lovely through ball to Siaj who first time struck the ball towards the top left corner past Mannus. A great finish from the debutant just ten minutes into his debut.

Siaj hit the bar moments later from close range which would have opened this game right up but Rovers put an end to any comeback talk two minutes later as Jack Byrne added his name to the scoresheet, rolling the ball into an empty net after Emakhu forced McKeown into a fine save.

The hosts ran the bench after scoring the fifth, with all five changes made just after the hour mark. Tetteh, Power, and Burke all seeing some game time.

Rovers saw the game out with ease towards the end, sending their fans home happy and looking ahead to a trip to Belgium on Thursday knowing their lead at the top is safe.