Rovers pull ahead in title race 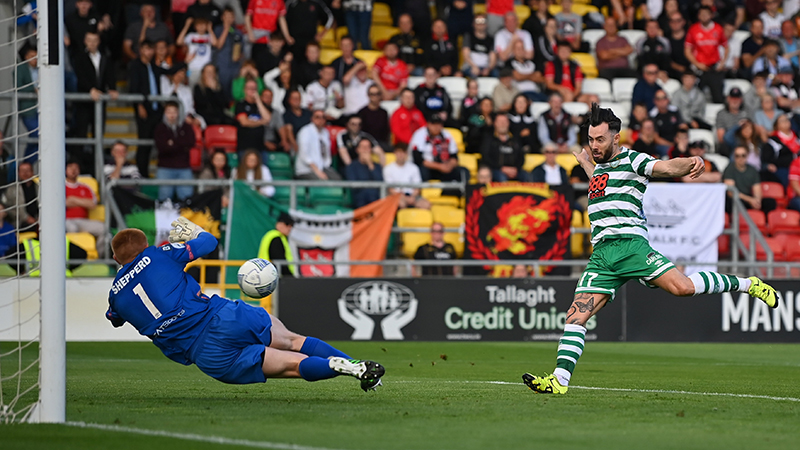 The hosts made the brighter start and looked dangerous with their aerial deliveries, but twice found themselves stunned on the counter-attack.

Rory Gaffney had acres of grass to advance into, speeding away from Rory McCourt's tactical foul attempt, before unselfishly releasing Greene across him to convert inside the area.

McCourt was booked for his cynical challenge and later limped off with a foot injury in the first-half, as Dundalk's lack of depth on the bench meant a need to reshuffle the pack.

Captain and creative midfielder Robbie Benson was shifted into a makeshift defensive position as a sacrifice, with Keith Ward coming on.

The lack of cohesion was clear shortly after the half-hour mark, as they conceded again - just moments after having John Martin's goal controversially disallowed for a foul in the build-up.

From the resulting free-kick, Shamrock sped away and exploited Dundalk's gaping defensive line once more as Greene turned creator, producing a fantastic half-volleyed assist for Towell.

He couldn't miss from close-range against his former side, and left the pitch to celebrate in-front of former supporters on an evening where the visitors would've felt hard done by.

They were without top goalscorer Patrick Hoban through injury, while second-top marksman Daniel Kelly was also unavailable here.

It could've been a different game but for an inspired goalkeeping display by Alan Mannus, making multiple saves to repeatedly keep the visitors at bay.

Ward's free-kick was destined for the top corner before the 40-year-old clawed it away to safety, minutes before Rovers added a third.

A forceful sliding tackle in midfield saw the loose ball pounced upon by an accelerating Greene, who charged beyond his marker down the flank and fed Gaffney for another easy finish in transition and third breakaway goal of the evening.

Both players came off to a hero's reception with 20 minutes to play, clearly with one eye on their mission impossible second-leg tie (0-4 aggregate) against Ferencvaros this coming Thursday.

They'll need Mannus to produce more magic like he did here, acrobatically swatting away shots from Benson, substitute Joe Adams and more besides.

Ward and fellow sub David McMillan were also both denied elsewhere as time wore on, during an evening where Dundalk registered 17 shots - 12 on target - had 66% possession, left empty-handed and conceded three in a league game for the first time in a year.

Football's fine margins. Decisions didn't go their way, some preventable defensive breakdowns led to attacks and they paid the price for failing to rectify those mistakes - but contrastingly you saw how much it meant to Shamrock Rovers manager Stephen Bradley and the fans at full-time.

Seven points clear, having played a game less, they now have one hand on retaining their league title this term. After a horror start to the week, who knows what Thursday night will bring?