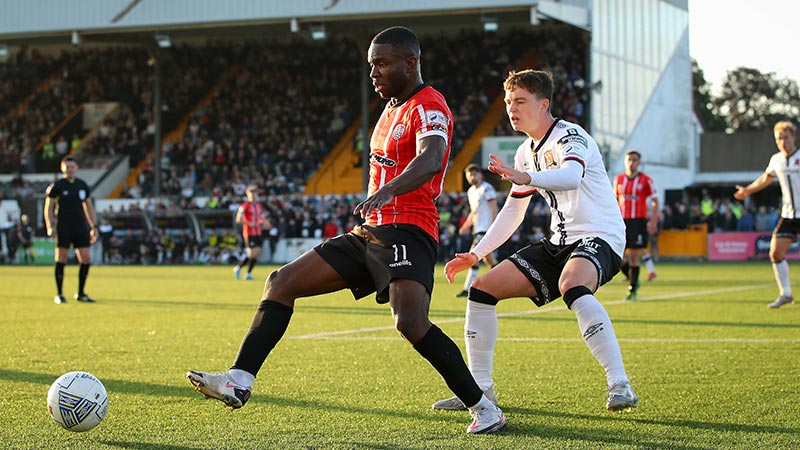 James Akintunde's first-half goal was cancelled out by Dale Rooney's stunning free kick, forcing Drogheda United and Derry City to share the spoils at Head in the Game Park. Akintunde's goal appeared to be the start of a great night for the away team.

The Candystripes had been in control for the majority of the game. But Drogheda had other ideas as  Dale Rooney beat Maher with a superb strike to tie the game for the Drogs after Drogheda the home side survived much of the storm.

Patrick McEleney got the ball on the edge of the box, and despite McCabe having it covered, he fired a goalward with a low effort to open the chances of the match. Will Patching stole the ball from Georgie Poynton and was about to score, but McCabe once again was called upon to make a vital save. Patching's low curling attempt was successfully blocked by the Drogheda goalkeeper.

It wasn’t all one-way traffic as Ciaran Coll gave the ball to Dylan Grimes, who crossed it to the back post where Dean Williams was waiting but it just missed him.  James Akintunde scored his sixth goal of the year to give Derry the lead. Evan Weir was spun by Akintunde and he fired a low effort past McCabe and into the bottom corner.

With more purpose in the second half, Drogheda pressed the visitors with counterattacks and a free kick from Dean Williams forced Brian Maher to make a superb save. They were to get the equaliser when Daly Rooney, who had been fouled by Connolly, was awarded a free kick. Rooney stepped up and curled a beautiful ball into the top right corner. Will Patching's free kick on the edge of the box took a deflection, and McCabe successfully collected the ensuing corner kick as Derry continued to hunt for a win.

The home side nearly went into the lead as Even Weir produced a superb cross into the box, finding Dale Rooney, who struck a powerful volley that crashed off the post and to nearly give the home side the lead. Declan Glass' cross-shot from Derry could have gone anywhere right at the death, but Andrew Quinn cleared it off the line in the last seconds to prevent a dramatic winner.

Another point gained in the Premier Division survival for Drogheda - Derry once again loses a lead and has to settle for a point.