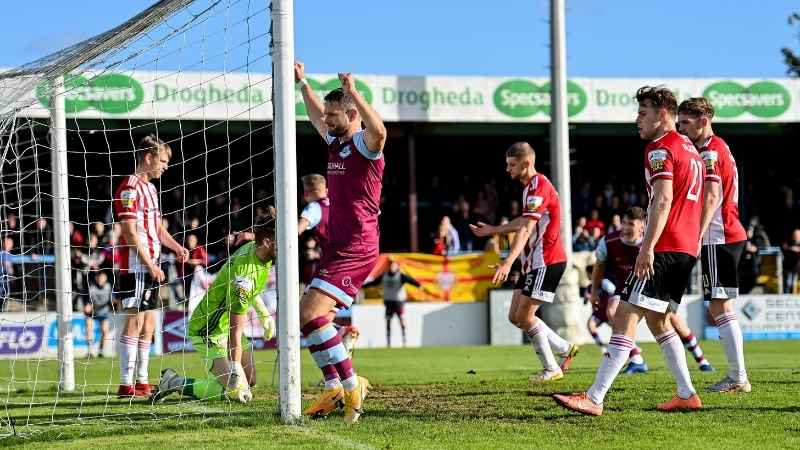 Killian Phillips’ lone goal held all the three points for Drogheda United at home to Derry City, as they practically secured their presence in the Premier Division for 2022.

On the other side, this was a disappointing outcome for City, as they lost a tremendous opportunity to reach the top-3 after Finn Harps’ impressive 2-all draw against Sligo after being down to ten men and down two goals to nil.

The Candystripes were all over the pitch at the start, as they came on energetic and very much on the front foot looking for a win to settle themselves on the third spot of the table after Rovers faltering against Harps.

Garry Deegan played the hero role inside the first five minutes by blocking what could be a very dangerous header to David Odumosu’s goal.

Akintunde connected to his right foot, a ball broken kindly to himself on the penalty spot; as he didn’t manage to keep his shot down.

Evan McLaughin brought yet another good chance for the men from the North, by invading Drogs box from the left and firing a powerful shot across the face of the goal to go off inches away from the woodwork.

Joe Thomson was the next on the list coming close to breaking the locker. A lack of communication between Odumosu and Joe Redmond almost ended up with Thomson sending it into the back of the net.

The goal seemed to be knocking on City’s door but it was United who only need a proper chance to break through, as Killian Phillips enjoyed a follow-up from a corner to head it in. close to the break.

Matters returned into the pitch with a completely different face and breathless first five minutes; Mark Doyle found room for a shot inside of the box but got his effort deflected, shortly before Darragh Markey saw Gartside making a huge save to his shot.

Jamie McGonigle replied on the other end, with Odumosu also taking out the best from the play with an easy save.

Derry’s best chance to reduce damages came through Junior Ogedi-Uzokwe, as he couldn’t give the best finish to a cracker cross sent in by Ciaran Coll.

The substitute Jordan Adeyemo had the chance to seal the score on the whistle all alone with Gartside, with the goalkeeper holding his side to the game for a couple of minutes.