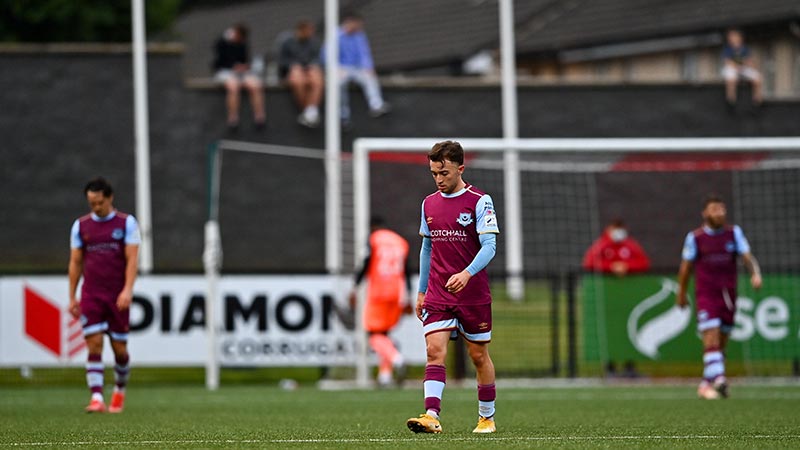 Jamie McGonigle’s starting goal and a brace from wing-back Danny Lafferty compounded Drogheda United to another defeat as Derry City ran out 3-0 in a comfortable win at the Ryan McBride Stadium.

While McGonigle’s effort was one that showed skill in his execution, Lafferty’s second goal a long-range effort was the one that had the home fans on their feet with a stunning effort. This win gives City a realistic chance of building towards fourth place come to the end of the season.

The home side took the game to the visitors from the outset and McGonigle was instrumental in the early series of attacks.

He had the first shot on target with a low effort that was well saved by David Odumosu who would be the busier of the goalkeepers during the match. United had Gary Deegan to thank for not conceding early as he made a headed goal-line clearance following a dangerous free-kick that was sent into the area.

Derry got their just rewards for their attacking prowess as McGonigle, following an excellent ball sent in by Joe Thompson saw him cut inside onto his right foot and curl it past Odumosu, that was his first goal as a starter for Derry. Thompson nearly added a second just before halftime as a loose ball from Deegan fell to the Derryman whose shot on the edge of the area was well saved by Odumosu.

Drogheda came out the second half with intent and Darragh Markey looked to get the away side back on level terms but his low effort was saved by the outstretched Nathan Gartside. They continued to press and a fantastic free-kick sent in from Hyland curled past everyone and Massey tried to head it back into the area but it was cleared.

Following an excellent save from Odumosu to deny Thompson he could do nothing to stop Danny Lafferty’s first goal of the night as the wing-back took the ball down and slotted it past the Drogheda keeper from close range. While his first goal was about precision his second was about accuracy and excellence as he had the fans on their feet with the ball fell coming to him forty yards from goal his high curling strike nestled to the top right-hand corner. A goal worthy and fitting to win any game.

A professional performance from Derry who play Dundalk next week and will be hoping to catch them on a European hangover, for Drogheda this loss could see them dragged into the relegation quagmire as Tim Clancy has much to ponder from his side.