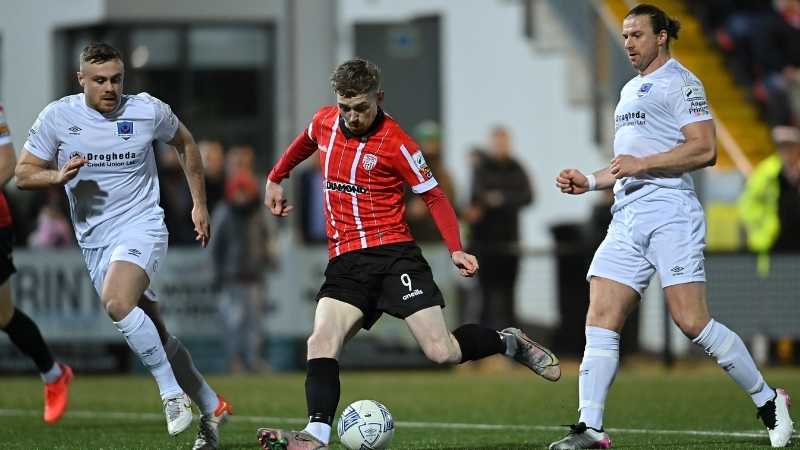 A brace from Jamie McGonigle sent Derry City on their way to a comfortable 2-0 win over Drogheda United at The Brandywell in the League of Ireland Premier Division.

Drogheda United are still in search of their first away win of the campaign while Derry City remain undefeated.

It was Drogheda United who almost took the lead after just over two minutes on the clock, but the hosts had Brian Maher to thank for denying it.

After a sloppy opening couple of minutes for Ruadhri Higgins side , the ball fell to Dayle Rooney who unleashed a rocket off his left foot from just inside the area.

Thankfully for Derry, Brian Maher tipped the ball around the posts.

Sadly for Drogs, this was as good as it got during the first period and Derry City made the breakthrough after just four minutes.

Shane McEleney’s long ball found the lively Brandon Kavanagh on the edge of the Drogheda box.

Kavanagh flicked the ball into the path of Jamie McGonigle who put the ball onto his left foot and buried it into the bottom corner to give his side an early advantage.

Darragh Nugent and Gary Deegan struggled in the middle of the park for Drogheda and found their pockets picked on multiple occasions by Joe Thomson and Will Patching.

The Derry duo both tried their luck at getting on the scoresheet, but their efforts from distance were saved by Long.

Midway through the first half, Will Patching’s long ball found Jamie McGonigle who cut the ball back to Danny Lafferty. Lafferty’s powerful effort looked destined for the bottom corner but somehow Sam Long saved his effort.

Derry City led 1-0 at the interval.

Drogheda began the second half with Adam Foley seeing plenty of the ball down the right hand side.

The visitors looked concentrated on focusing the ball down their right hand side to keep it away from Shane McEleney who was immense throughout the game.

Jamie McGonigle doubled his and his side’s tally just after the hour mark with another composed finish.

The Derry City danger man latched onto a long ball before rounding goalkeeper, Sam Long and slotting it into the back of the net to double the hosts’ lead.

The only negative to what was a complete domination of a performance from Derry City was the injury to Michael Duffy.

Duffy came on just after the hour mark for his first appearance for his side since rejoining the club but went off after suffering an injury less than ten minutes later.

Derry City go top of the Premier Division table after the win.