Drogheda grind out draw with Derry 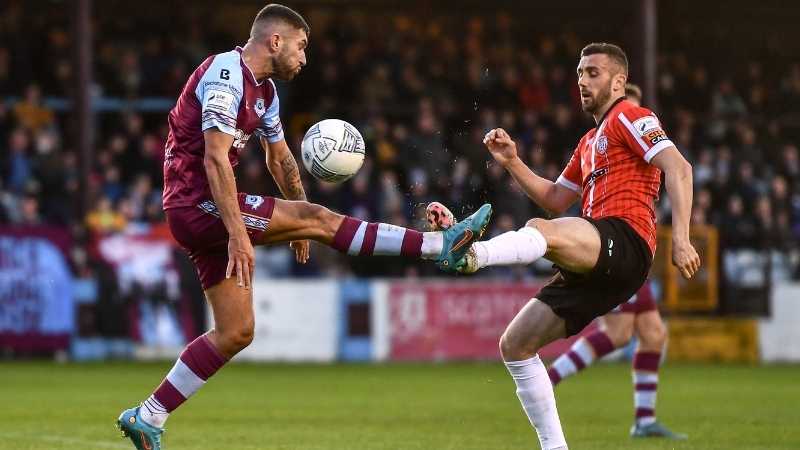 Joe Thomson gave the visitors the lead on 30 minutes with a low volley from the edge despite the Drogs starting brightly.A miraculous save from Sam Long stopped Akintunde from two yards out in the 35th.

Five minutes later Ryan Brennan equalised with his head for the Louth side after the Candystripes failed to clear a corner. Kevin Doherty’s side defended valiantly to hold on to an impressive draw.

This was the grittiest of Drogheda’s gritty draws in recent times and it now sees them undefeated in six games. However the home side actually began as the brighter team, pushing a high defensive line and playing a brave game against the league leaders.

They would see the first chance of note in the game when Luke Heeney struck low outside the area but Nathan Gartside saved. After about 20 minutes the game became scrappy, and after another five, Derry started to maintain some possession.

It was the Brandywell outfit who then took the lead in the 30th minute through Thomson who beat his man after picking it up in midfield and volleyed low and hard past Long from the edge. Long however pulled off heroics to stop Akintunde doubling five minutes later with what should have been a tap in.

This proved pivotal when local man Brennan equalised just before the interval. The away side failed to clear a corner and Brennan attacked the second ball in with a header to make it 1-1.

The second half was completely Derry’s game. Will Patching had a good effort straight into the half which started 45 minutes of onslaught where City constantly probed on the edge of the home box.

The Drogs were utterly disciplined and threw body after body in front of the ball, with Andrew Quinn being particularly commendable. Quinn had even more to deal with down Drogheda’s right as Ruaidhri Higgins brought on some quality on the left in Jamie McGonigle and Brandon Kavanagh with 15 to go.

The claret and blue battled and battled until the end of the onslaught, which culminated with a series of nervy corners from the visitors. One in particular from Patrick McEleney struck the post and there were a couple more corners that had to be scrambled clear in stoppage time.

Drogheda once again proving to be so difficult to beat, especially thanks to the brilliant Sam Long in goal. Derry will be feeling the pressure now at the summit as Shamrock rovers now sit a point behind.