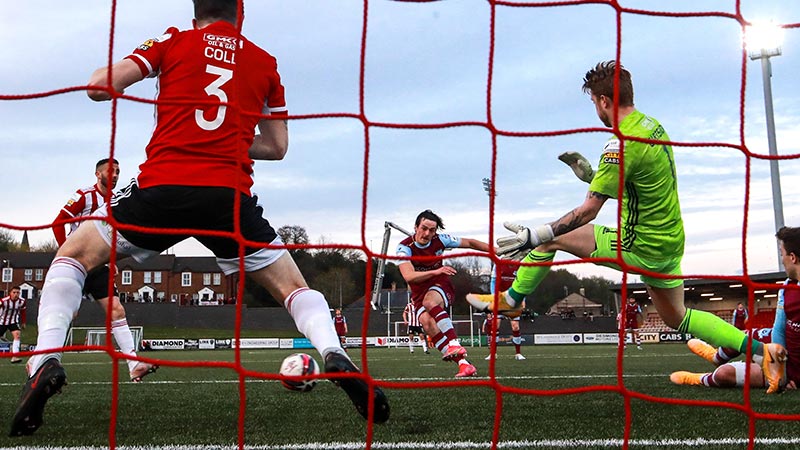 City were on the backfoot early on as James Browne got on the end of a cross in the 24th minute to ensure the visitors took an early advantage.

Boyce headed in Will Patching’s fine cross from a corner kick on 39 minutes to make it 1-all.  This came after a series of efforts from the hosts, including a long-range effort from Brendan Barr in the 31st minute but Colin McCabe was a safe pair of hands between the posts for Drogheda United.

A minute later Derry City had a chance to redeem themselves, but a Patching corner failed to land to any homeside attackers.

It had seemed Drogheda United would take all three points after Browne’s goal. It was a very impressive first half for both sides and at the break the talk was of who would be able to up it that extra gear in the closing 45 minutes.

Drogheda United had a chance to go top if they pulled off a victory, but they failed to make an impact in the second half to seek out a winner!

Hugh Douglas had a brave opening half, where he pulled strings at the back, but was believed to have been an injury concern and went off at half time for the visitors.

This draw leaves Derry City seventh, four points behind on goal difference from Dundalk who have a game in hand.

Despite the absence of Douglas in the second half Drogs didn’t have to worry much, with Jack Tuite coming on.

The visitors were certainly playing for lower stakes than City and with the pressure off they started the second half brightly with Brandon Bermingham coming on in the 58th minute.

The Brandywell outfit did really well to turn away his influence from helping get a United winner. However Ronan Murray went off early after a few attempts where he pushed forward he was unable to break through for Drogheda.