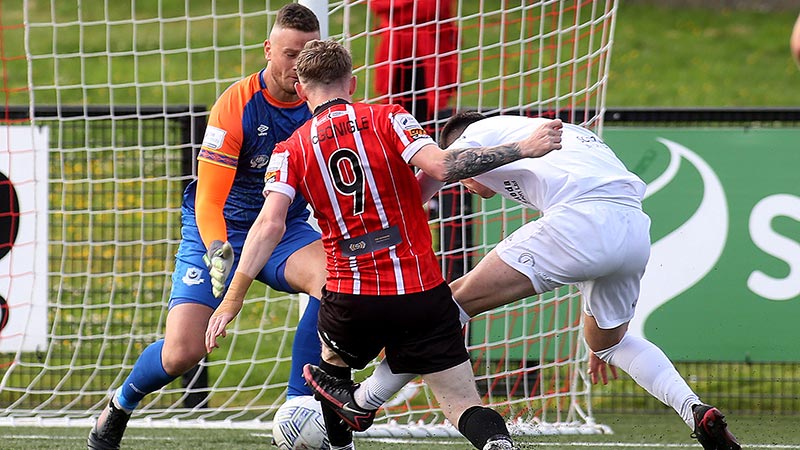 Drogheda United battled hard to earn a 1-1 draw with Derry City at the Brandywell this evening.

Matty Smith opened the scoring but Derry, not for the first time this season, had several chances to extend their lead. And their profligacy was punished when slack defending led to a penalty for the visitors, converted by Dean Williams.

The Candystripes started strongly with good chances for Jamie McGonigle and Cameron Dummigan, in particular. Their first half positivity drew dividends just after the half hour.

Will Patching conducted the move, concerted pressure led to Patching’s chipped cross, McGonigle’s header was pushed out by Drogheda keeper Colin McCabe and Matty Smith was on hand to tuck the rebound away.

The teams exchanged yellow cards either side of the interval, but the home crowd were desperate for a second, nerve-settling goal. Patching almost provided it with a 25yard zinger that drifted just wide.

And the nerviness of Derry’s desire for a win became evident as Drogheda were gifted a couple of chances from astray passes. Brandon Kavanagh’s poor backpass was spared by Shane McEleney’s goal-saving tackle on Dayle Rooney.

Then, youngster Caoimhin Porter who had a fine game, denied Williams in the penalty area with a superb tackle.

Drogheda were the calmer, more coherent side and Patrick McEleney, retuning from injury, was put in trouble by Joe Thomson’s slack header. McEleney fouled Ryan Brennan, who admittedly made the most of the contact and Williams kept his cool to make it 1-1.

A late penalty appeal and McGonigle agonisingly striking the side netting from close range were the home side’s best late chances for a winner.

More frustration for Ruaidhri Higgins and Derry must add a ruthless, clinical edge if they are to record a win soon. They are at bottom side UCD next week whilst Kevin Doherty’s Drogheda, undoubtedly happy with a point here, host Sligo Rovers.