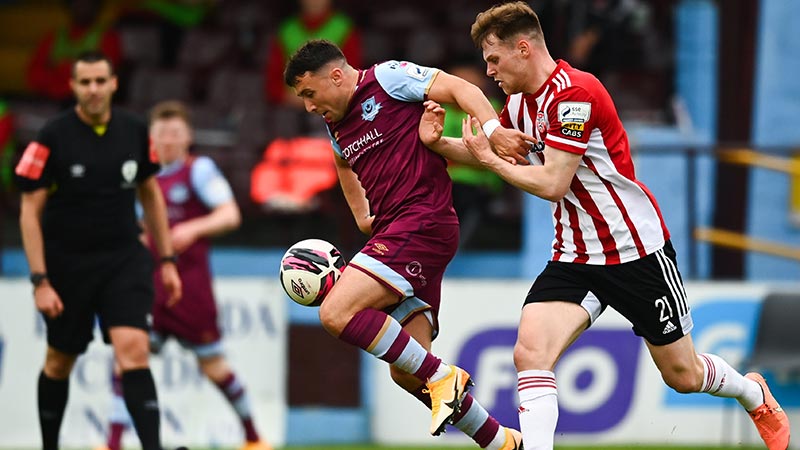 Derry City took all three points at Head In The Game Park against Drogheda United after plenty of drama tonight.

Two Will Patching free kicks either side of a Mark Doyle penalty secured the three points for the Candystripes. Both sides were also reduced to ten men late on after Darren Cole and Jordan Adeyemo both received second yellow cards.

Derry took an early lead after ten minutes through a Patching free kick. He looked certain to cross but fooled everyone including Drogheda ‘keeper, David Odumosu by going for goal.

An injury to Killian Phillips after 18 minutes saw him replaced by Luke Heeney and forced Tim Clancy to reshuffle his side by changing formation. This seemed to unsettle the Drogs who were struggling to create any real chances against the Derry defence.

The start of the second half was a scrappy affair with both sides struggling to take control of the ball. A penalty shout from James Akintunde was the only memorable moment of the first 15 minutes of the second period but it was waved away by the officials.

The home side got back into the game after a cross was handled by Cameron McJannett in the 62nd minute. Mark Doyle stepped up to score his seventh goal of the season and drew his side level. Doyle is now top scorer in the division.

Patching popped up again with another wonderful set piece which flew past Odumosu, hit the crossbar and bounced over the line. Derry were ahead once more, but the drama was far from over.

Less than ten minutes later Darren Cole received two yellow cards and was dismissed, giving Drogheda some hope that they could pull the game back. However, just two minutes after Cole’s dismissal, Jordan Adeyemo also received a second yellow and both sides were reduced to ten men.

Nathan Gartside was forced into a great save late on to keep his side ahead and he was more than equal to it.

This result sees Drogheda miss out on their chance to leap-frog St. Patrick’s Athletic after their loss to Dundalk.

Derry on the other hand are level on points with the Lilywhites on 17 points as we head into the mid-season break.