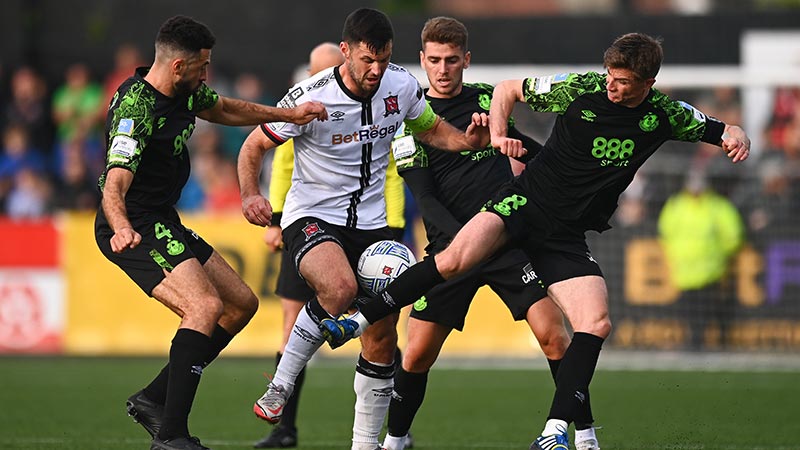 With barely ten minutes remaining in the game, Robbie Benson scored the match winning goal for Dundalk, cutting the gap at the top to five points over Shamrock Rovers.

Both teams tested their respective defences, but Lewis Macari was the architect of Rovers' demise, as Benson supplied the finishing touch to give Dundalk the victory at Oriel Park.

A game with little give and take was broken with just ten minutes to go as Robbie Benson scored the vital goal for Dundalk to close the gap at the top to five points against Shamrock Rovers. Both sides asked questions of their respective defences however Lewis Macari the architect of Rovers destruction as Benson applied the finish to give Dundalk the win.

The game was taken to Dundalk by the visitors after a brilliant ball from Gaffney found Danny Mandriou, who had two chances but his spectacular overhead kick flew over Sheppard's post. Richie Towell also attempted an overhead kick but it went over the bar after another excellent cross from Gary O'Neill.

Darragh Leahy met a Stephen Bradley free-kick at the back post for Dundalk, but it went wide. Then Rory  Gaffney had two chances in short succession on the Dundalk goal, the second of which saw the hoops striker fire a shot from the edge of the box that was comfortably saved by Sheppard in the Dundalk goal. With a flying header that went across the face of the Rovers goal, Mark Connolly came close for the home side, but no one could make the crucial connection.

The second half had only just begun when Gaffney had an early chance to score, beating Mark Connolly and hitting the side netting as Richie Towell waited to pounce. As Dundalk seized control of the game, the away side put in some solid defending. Paul Doyle had a snapshot on the edge of the box that went over the bar before Daniel Kelly put in a great cross that was pushed away for a corner following some initial link-up play between Hoban and Benson.

Dundalk continued to test the away side's defence, as a great break from the Oriel men saw Steven Bradley find Paul Doyle on the outside of the box again, but he sent his effort over the bar.

The goal and the deadlock came in the 80th minute as a sensational move by Hoban to hold up Sam Bone's ball with his chest before laying off to Macari on the right. His cross is inch-perfect for the inrushing Benson to score his 12th career goal against Shamrock Rovers.

Dundalk's sixth win in a row, and with a game in hand, a title race appears to be on the cards. There seem to be parallels to the Lilywhites' 1995 title triumph – Dundalk supporters may dare to dream at this juncture.