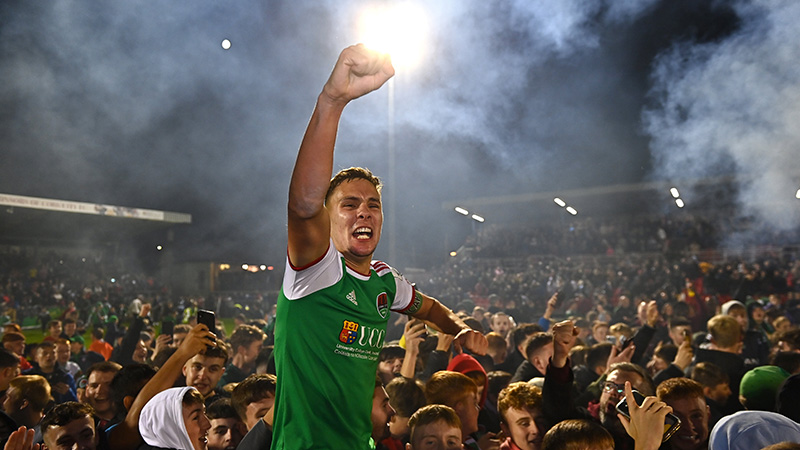 Cork City are officially champions coupled with a return to the Premier Division after a two year absence with a 0-0 draw against Wexford tonight.

The game took a few minutes to settle with the first chance not coming until the 11th minute when Cian Murphy was inches away from tapping in Darragh Crowley’s cross.

The visitors first chance came in the 17th minute when Jack Doherty’s long range shot was tipped over by Jimmy Corcoran.

This chance proved to the outlier in a half dominate by the hosts who could have had a penalty when Murphy was upended in the box.

What followed was a flurry of shots from Barry Coffey and Ruairí Keating, both of which Alex Moody was equal to in an impressive first half display from the Wexford goalkeeper.

Manley was called to the rescue again just before the break when he made a great save from Murphy at the front post to keep it scoreless at half-time.

City continued to dominate in the second half despite struggling to create a chance with Wexford reduced to playing on the break.
While the first quarter was quiet, proceedings began to spark once again when City had two goals disallowed in the space of five minutes.

The first came through Cian Murphy in the 65th minute which was ruled out for offside while Barry Coffey’s header was undone for a foul in the build-up.

City were unable to get the breakthrough as Wexford held on for a 0-0 draw. Despite this there were still joyous scenes at a sold out Turners Cross as Galway’s home defeat meant the Rebel Army return to the Premier Division for 2023.