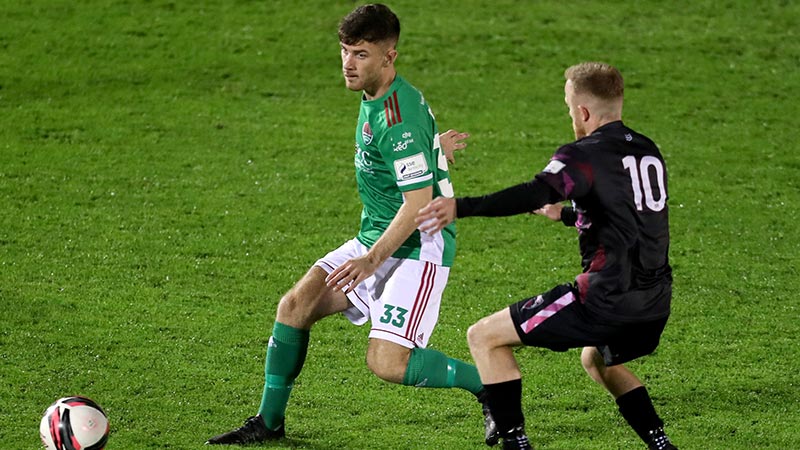 Cork City cruised to a comfortable 4-0 victory over Wexford FC at Turner’s Cross in the League of Ireland First Division.

Two goals either side of half time sealed a well deserved win over ten man Wexford.

City got off to the perfect start when Cian Murphy latched onto a ball in behind the Wexford defence and he calmly slotted the ball past Corcoran into the bottom corner to open the scoring and net his 11th goal of the campaign.

Moments later, Cork almost doubled their advantage through Cian Bargary who caused havoc down the wing for his side throughout the game. Bargary cut in from the left hand side before placing the ball towards the bottom right corner. Thankfully for the visitors, Cleary cleared the ball off the line to keep the score at 1-0.

Colin Healy’s side did double their advantage eight minutes before the interval. Aaron Bolger’s corner was met at the back post by Hakkinen who headed the ball down to Barry Coffey who calmly slotted the ball home from close range to extend his side’s lead.

Things went from bad to worse for the visitors when the linesman flagged for a poor foul from Lorcan Fitzgerald. After the referee consulted with his linesman, Fitzgerald was shown a straight red and Wexford would have to see out the remainder of the game with ten men.

Cork City went out with an attacking mindset again for the second period and Barry Coffey nearly found the net again after Bolger’s cross found the head of Coffey, but the midfielder couldn’t keep his effort on target.

With just over 15 minutes to play, City netted their third of the evening. Jack Moylan took too much time on the ball and Cian Bargary dispossessed the Wexford defender before rounding Corcoran to fire home a well deserved goal for the Cork City wide man.

Bargary came close again just minutes after when he cut in from the right hand side and attempted a left footed curler to the far post. Bargary didn’t wrap his foot around the ball enough with his effort going just wide of the target.

The arrival of Dylan McGlade off the bench gave the Leesiders another boost and after some great play on the left flank, McGlade fired home into the bottom corner, through the hands of Corcoran to put the icing on the cake for Cork City and give them a well deserved three points.

City travel to Dublin next week to take on UCD at the Bowl, while Wexford travel to high flying Galway United.