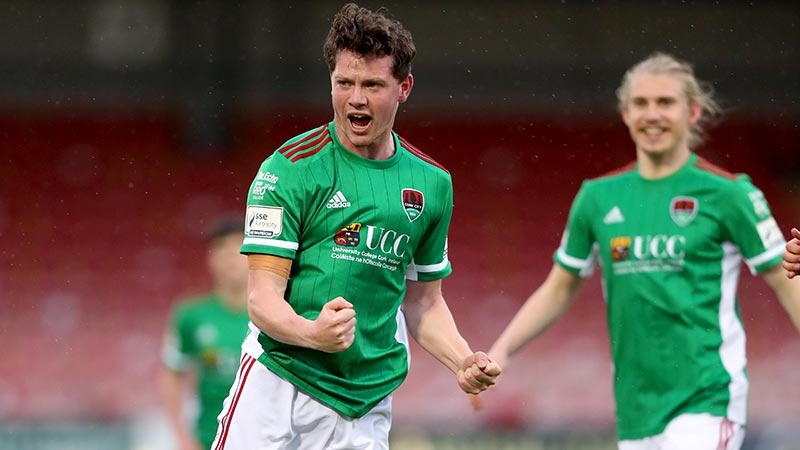 Cork City scored five times to power to their second win of the season against Wexford FC tonight at Turners Cross.

A brace of goals by Cian Murphy, Beineon O'Brien Whitmarsh and one from Darragh Crowley secured the confidence boosting three points for the hosts.

While the result was important to lift the Rebel Army up the table, it was the manner of the performance.

Green shoots sprung forth on the Turner's Cross manicured turf.  Jack Baxter, the Preston loanee, was excellent, highlighted by a number of set-piece deliveries.

Jack Walsh proved a handful up top, while Jonas Hakkinen, the Finnish defender, was stubborn and assisted Mark McNulty to keep a clean sheet.

Cian Murphy was full value for his two goals. He headed home from a Baxter delivery, to open the scoring, early in the first half.

Darragh Crowley, doubled the advantage with a looping header of his own, punishing Wexford's failure to clear their lines.

It was a miserable night for goalkeeper Ross Treacy, who was making his debut for the visitors.

Unfamiliarity and rust-bred errors in the Wexford defence.

An attempted quick clearance by Treacy was punished by Cian Murphy to score his second.

City led by three at the break.

The second half witnessed Cork continue to control the game.

Beineon O'Brien-Whitmarsh scored with his first touch, after being introduced as a substitute, punishing a nervous moment by the Wexford keeper.

Dylan McGlade played a wonderful pass to O'Brien-Whitmarsh, who found the corner of the net, to add to his tally in stoppage time.

Wexford had their bright spells. Yes, they remain without points so far, but they kept trying to play football, getting the ball down and looking to create.

Kyle Robinson and Jack Doherty had the better of their side's chances.

Better days/nights lie ahead for Wexford, while Cork City jump to seventh in the table.