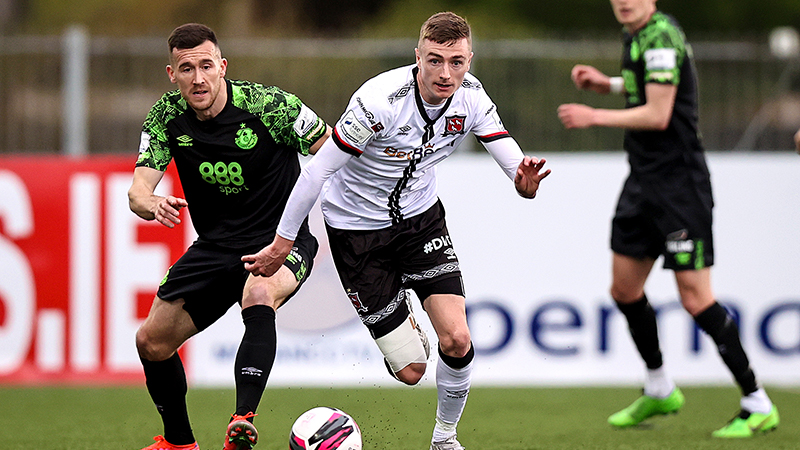 Records are meant to be broken and that is exactly what happened to Shamrock Rovers tonight as Dundalk got a morale-boosting victory to end the current league champions thirty-three league win streak at Oriel Park.

A goal from Patrick McEleney and birthday boy Daniel Kelly sealed the victory and cancelled out Joey O'Brien's equaliser. Dundalk saving Alessio Abibi's blushes in a win much needed for all at the club.

In an opening period that saw Dundalk having to contain a high pressing Shamrock Rovers front line, Graham Burke having the first sight on goal from a short-taken corner it was the hosts who took the lead much to the surprise of the visitors.

On the break, Daniel Kelly laid an excellent through ball to Patrick McEleney and despite the attentions of Lopes, he kept him at bay to rifle a shot into the top right-hand corner. The celebrations were short-lived as Rovers were level within 90 seconds.

A freekick conceded by Cameron Dummingan from the restart was sent in by Burke and Alessio Abibi spilt the ball which trickled to the back post where despite Chris Shields best effort O’Brien slotted home with ease.

The away side continued to press with Gaffney and Gannon all having attempts in quick succession, however all were handled well as the Dundalk defence stood firm. The Louth side responded with a brilliant move from McEleney who fed a beautiful curling ball into Michael Duffy but Mannus did excellently to save the effort.

On the restart the away side took it to the hosts and struck the post twice in the early exchanges. Aaron Greene thought he had got his side back in the lead after he expertly lobbed Abibi only for the post to deny him. Graham Burke also hit the goal frame as his high curling effort cannoned off the post, they would soon rue those missed chances.

Daniel Kelly put Dundalk back into the lead when he latched onto a clever pass and hit an unstoppable shot past Mannus that hit the roof of the net. Despite pressing high it was Dundalk who had the better of the chances as the games neared its conclusion. Jurkovskis cut onto his right and hit an excellent effort that just went wide.

Greene had another guilt edge chance flash wide as it bounced past the wrong side of the post in the final minutes. Despite a late rally, the away side couldn't get the breakthrough needed as Dundalk take the win and the vital three points.