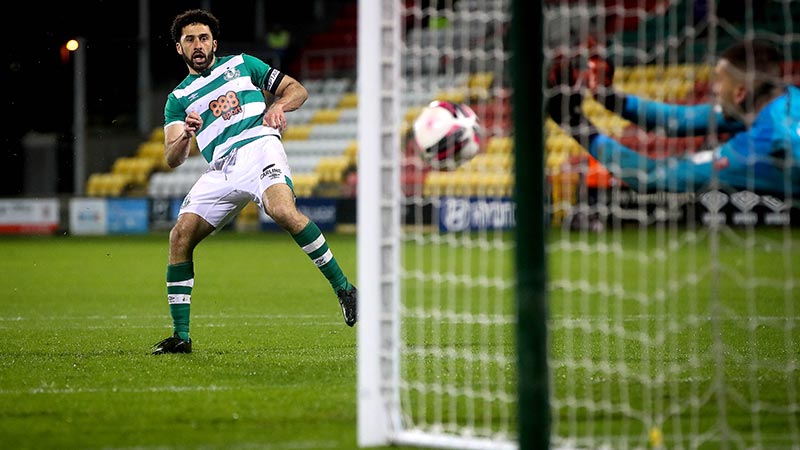 Alessio Abibi was the hero for Dundalk as the first trophy of the season goes to Dundalk after defeating Shamrock Rovers in a penalty shoot-out in the Presidents Cup at Tallaght Stadium.

Despite going down to ten men after the sending off of Sonni Nattestad who saw a straight red following a foul on Graham Burke.

Shamrock Rovers started the game in earnest with former Dundalk player Sean Gannon crossing into the area for Rory Gaffney ready to capitalise only for Andy Boyle to clear the danger, Rovers continued the early pressure with chances falling to both Sean Gannon and Graham Burke only for Alessio Abibi and his Dundalk defence to hold firm.

Dundalk could count themselves lucky when a corner whipped in at pace was met initially by Liam Scales only for it to be saved by Abibi, the Dundalk custodian had no time to think as it looked as if Joey O'Brien looked set to score only to be denied by the outstretched palm of Abibi once more.

That missed opportunity is one they would come to rue later.

As the half grew Dundalk began to compose themselves in the game and Jurkovskis' cross from the right was nearly met by the onrushing Patrick McEleney and David McMillan both of whom mistimed the pace and placement of the ball and were ahead of the place and the teasing cross evaded them.

Dundalk's continued pressure would pay off as a pinpoint corner delivered by Patrick McEleney was met with height and pace by Sonni Nattestad whose header found the top of the net.

It would be the first step towards making a name for himself on his arrival to League of Ireland football, however this wouldn't be his lasting impact on the game.

The second half saw Graham Burke fire an early warning sign to Dundalk with a low range effort but it was saved comfortably by Abibi. However, Liam Scales would light up the empty Tallaght stadium with a sublime goal that was worthy of the equaliser.

Taking the ball on from his right foot he hooked the ball excellently onto his left before firing a low range effort past the outstretched Abibi. Not long after the game would reach a boiling point.

No hold barred has always been the mantra of games between Shamrock Rovers and Dundalk and tonight was no exception, to some a well-timed tackle, others a cynical foul Sonni Nattestad took down Graham Burke and both teams protested both innocence and guilt in equal measure.

The referee trying to diffuse the situation banished Nattestad from the game with a straight red card before adding cautions to both Joey O'Brien and Chris Shields. Stephen Bradley for good measure was booked also for his protests from the sideline.

Dundalk rung in the changes with defensive players Greg Sloggett and Cameron Dummigan deployed to fill the void vacated by Nattestad and despite a late attacking rally from Shamrock Rovers they held firm as penalties decided the fate of this contest.

As the penalties pendulum swung advantage to both sides during the course of the game it was Alessio Abibi who was the hero of the shootout who saved from both Rory Gaffney and Roberto Lopes. The Albanian keeper as the shootout wore on seemed to get a measure and etched closer to denied Rovers with each penalty.

With the game looking to fall in favour of Shamrock Rovers, Graham Burke blazed over before Dundalk's Darragh Leahy despatched his penalty with ease. Roberto Lopes stepped up and despite a well-taken penalty Abibi used every inch of his six foot four frame to parry the ball away and claim the Presidents Cup for his new club.