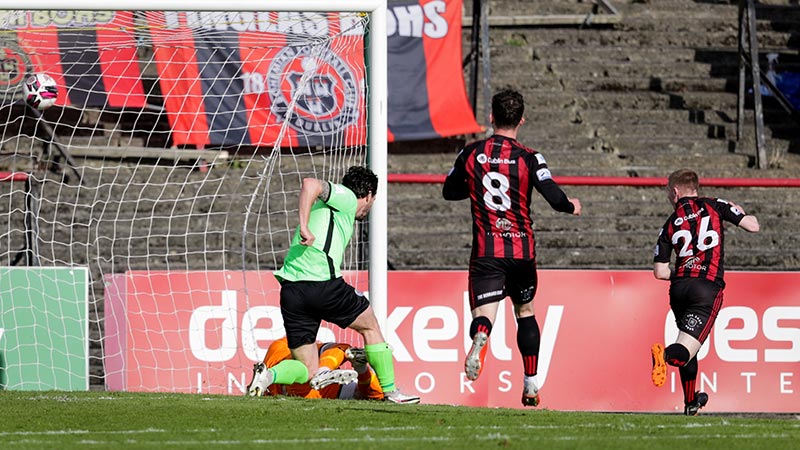 Bohemians finally found the performance and result that they have been looking for, as they blew away Finn Harps 4-0 at Dalymount Park this evening.

Tierney opened the scoring after 13 minutes; while Coote added two long-range strikes in the first half, before the winning captain Keith Buckley added the gloss to the performance in second half injury time.

It was all Bohemians, as Burt and Tierney showed some early signs of what was to come with surging runs down both flanks; and it was Burt who created the opening goal.

The Scot capitalised on a defensive mistake, broke down the wing and his low cross evaded everyone until Tierney applied the simplest of finishes at the back post to put Bohs ahead.

Harps had barely gotten used to being behind when they had double the hill to climb. A driving 50-yard run saw the Harps defence part like the Red Sea; and Coote hit a long-range effort from well outside the box.

A mixture of the bounce and the low sun in his face seemed to trouble McGinley and he’ll be disappointed not to have kept out the midfielders strike.

Coote effectively ended the game as a contest on the stroke of half time with another goal, which took the wind of the Donegal sides sails. Another defensive mix up saw the ball arrive at his feet and his piledriver found the bottom corner of the net past McGinley’s dive.

Ollie Horgan rang the changes at the interval, and it had an immediate effect with an increased intensity from Harps.

Will Seymore found himself on the end of a Foley flick but couldn’t get enough power into his final effort.

Minutes later Seymore returned the opportunity to Foley, but the league’s top striker will be disappointed not to have forced a save from James Talbot in the Bohemians goal.

The visitors, fatigued after their mid-week exploits, were unable to maintain the pressure though and Bohemians provided the better quality through the second half.

It wasn’t for the lack of chances thought as Burt found himself on the end of a great pass from Devoy but a fantastic one handed save from McGinley kept the ball out of the net.

Bohs would have the last word; and it was their captain Keith Buckley who chested down the ball and volleyed home to seal a good win for the Phibsboro side.

Keith Long will be happy to finally have produced the result and performance that he would have been expecting to see more of this season.

Meanwhile Harps will be counting their wounds after a bruising trip to the Capital.