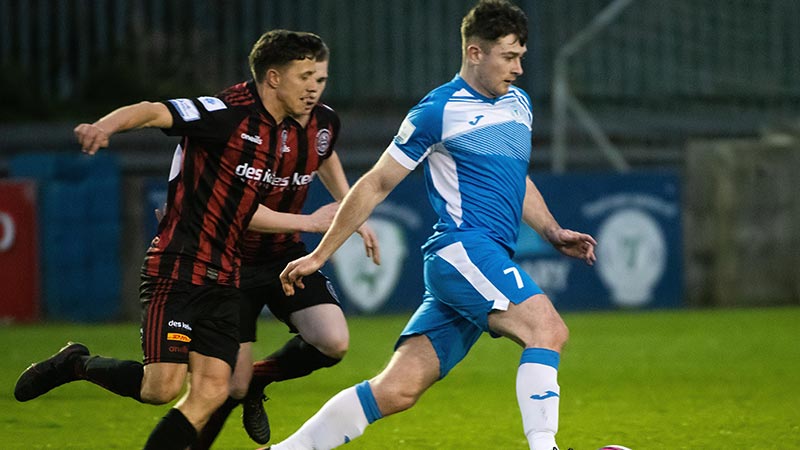 Finn Harps hosted Bohemians in the season opener in what proved to be a very tight game where the fancied visitors were unable to find a way back into the game after Adam Foley opened the scoring in the closing stages of the first half.

With neither team wanting to force the game early on it became a cagey affair, more like a strategic chess match than a war. As the game grew on Bohemians seemed to be taking control with some fine play and a couple of well drilled long throws by new signing Georgie Kelly and Rory Feely respectively.

Having picked up the first booking of the game in the 27th minute of the game, Kosovar Sadiki seemed to offer Bohemians a chance to capitalise with a free kick just wide on the right of the 18-yard box. This however was floated in and was no trouble to Harps netminder McGinley.

Soon after Bohemians defender Finnerty gifted an opportunity for Adam Foley as his poor back pass went straight into the Harp's midfielders' path who calmly round goalkeeper Talbot in the Bohemians' box and slotted into the empty net.

Just before half time Bohemians were in on goal when Sadiki made a perfectly timed challenge in the box to sniff out any danger, any imperfection would have surely seen the big man to an early bath and a Bohemians penalty.

The second half started pretty lively with Bohs probing for an equaliser with Georgie Kelly having a number of opportunities with only one troubling McGinley in the Harps net saving a strike from wide on the right with his feet.

Within a minute of each other Harps Conor Barry and Karl O’Sullivan both left the field with injuries, with their replacements almost having an immediate impact. Ryan Shanley coming close before the referee blew his whistle for a Bohemians free kick.

Bohemians continued to probe but the big man at centre half Sadiki, was dominant in the air seeing very little past him. Eventually Bohemians almost carved themselves an opportunity but for Kelly and substitute Oluwa getting in each other's way, leaving an easy ball for a grateful McGinley to collect.

The result sees Ollie Horgan's men join Drogheda United and Longford Town at the top of the table to form the most unlikely trio of league leaders.

Bohemians continued to probe however a stubborn Finn Harps refused to budge and held out with a good spell of play holding the ball in both corners of the Bohemians' end.

Harps finished out the additional time with 10 men as Connolly left the field of play with a hamstring injury however his job was done as a minute later the referee blew the final whistle leaving bohemians with a long trip home to Drumcondra with any points on the board.