Bohs sink Sligo thanks to Brophy and Prior 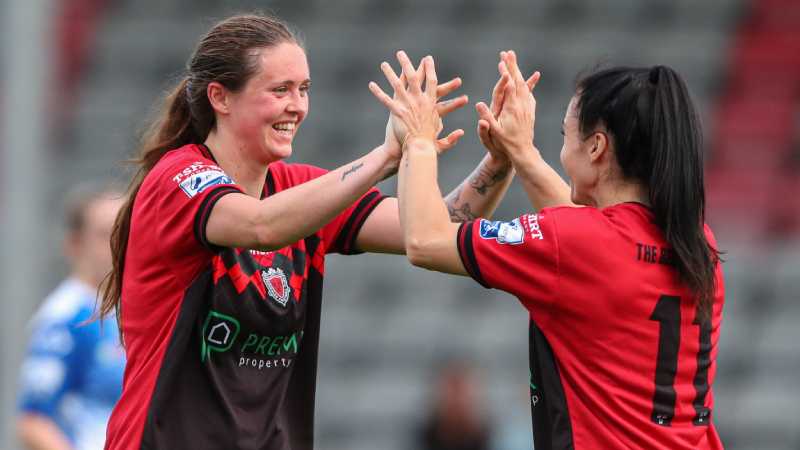 Sligo Rovers and Bohemian FC renewed rivalry today at the Showgrounds in the Women's National League just seven days after an absorbing FAI Cup encounter at Dalymount Park that the Dublin women won by 3-1.

This time around Bohemian FC took the spoils with a hard-earned, but well-deserved 2-0 victory with a tremendous duel between Kerri O'Hara for the Bit O'Red and Bohs speedster Abbie Brophy a highlight of the afternoon.

There was hardly a minute on the clock when Bohemian FC hit the front from a well-taken Niamh Prior goal that left the hosts reeling.

Then Lisa Murphy had a shot from distance for Bohs in the 14th minute that skimmed the top of the crossbar much to the relief of Sligo Rovers 'keeper Amy Mahon.

Bohs continued to press and in the 22nd minute Abbie Brophy was denied by another smart Amy Mahon save.

Mahon was kept busy for the remainder of the half with some respite from the water break, but the Mayo teenager was equal to anything Bohs had to offer with one particularly smart save that denied Chloe Darby in the 35th minute.

Mahon was in action again seconds after the resumption as Bohs continued to press the hosts and Erica Burke also had a good chance, but Sarah Kiernan averted the danger.

Emma Doherty had a half chance for the Bit O'Red on the hour, but she picked up a yellow card for her challenge on Bohs goalkeeper Rachael Kelly in her effort to get on the ball.

Sligo came more into the game after the second water break and Emma Doherty blazed wide in the 81st minute.

At the other end Amy Mahon produced another good save, but from the resultant corner Abbie Brophy pounced on the loose ball and rifled to the net from close range to seal the 2-0 victory in front of an official attendance of 309.