Devoy and Ogedi-Uzokwe deliver for Bohemians 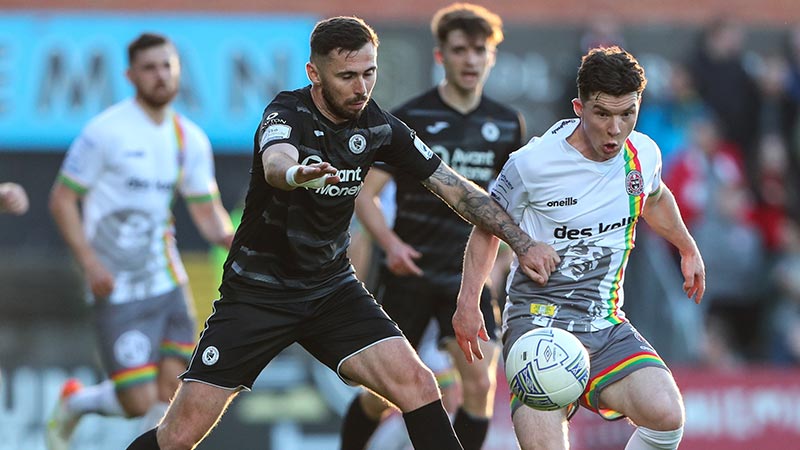 Goals from Dawson Devoy and Junior Ogedi-Uzokwe secured all three points for Bohemians as they beat Sligo Rovers 2-1 at Dalymount tonight.

A late Adam McDonnell strike wasn’t enough for the Bit O’ Red who struggled in this clash.

The opening 10 minutes were quiet and provided little chances. The only talking point being Junior’s shout for a penalty being waved away.

Ciarán Kelly came closest for the hosts after 15 minutes when Ed McGinty tipped his glancing header onto the crossbar.

Play was halted a few times in the first-half as Bohs were forced into making two changes. Kris Twardek and Sam Packham were both replaced through injuries before the half hour mark.

James Talbot didn’t have too much to do in the opening 45 minutes, however he did manage to punch a curling Karl O’Sullivan corner off of the line to keep the game scoreless.

Junior had the final effort of the half when he dispossessed Garry Buckley in the Rovers box but his effort from close range dragged wide.

Keith Long’s men continued to put pressure on the visitors in the second-half.

Dawson Devove fired a volley just over the bar 10 minutes after the restart after a great cross from Max Murphy.

The opener finally came just after the hour mark. Jordan Flores made a driving run into the Sligo box before pulling it back to Promise Omochere. Omochere managed to get the ball out of his feet and then layed it off to Devoy who fired home to make it 1-0.

Omochere would be involved in the second just 15 minutes later. Again, with his back to goal he rolled it to Junior who dinked McGinty.

Sligo finally got going after conceding and they found the back of the net with three minutes to play.

Adam McDonnell fired a low shot from the edge of the area past James Talbot but it would prove to not be enough for the visitors.

Tonight’s result means that Bohs overtake Sligo in the table. Both sides are back in action on Monday night with Sligo host Derry City, while Bohemians are away to St. Pats.