Trio on target in Rovers win 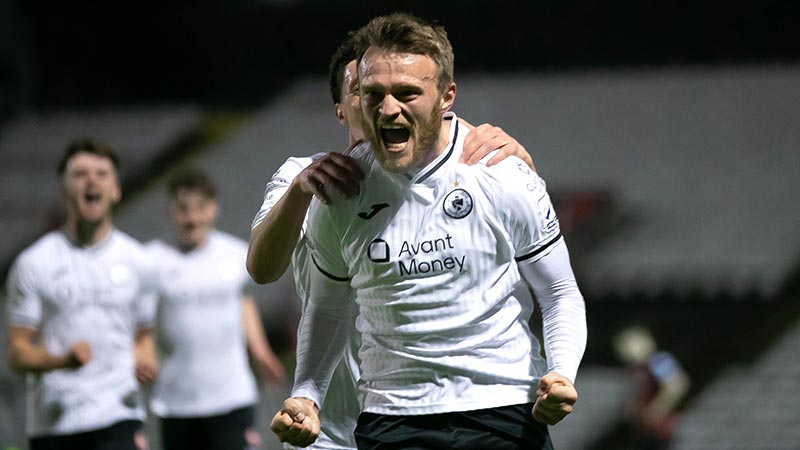 Jordan Gibson, Mark Byrne and David Cawley were on target, as Sligo claimed all three points with a deserved 3-1 win over Bohemians at Dalymount Park.

The visitors dominated the first half and opened the scoring after 30 minutes with a fantastic volley from Gibson.

Bohs found themselves level early in the second half after a long-range strike from Liam Burt almost broke the net in Dalymount Park.

But as Bohs pushed for a winner they were caught on the hop as substitute Byrne coolly slotted the ball home after 77 minutes; before Cawley sealed all three points the visitors with a stunning strike with three minutes of normal time remaining.

With both teams eyeing a place in the top three you’d be forgiven for thinking that they would be happy to deny their rivals three points and settle for a draw in their encounter at Dalymount Park. But you’d be wrong.

These clubs really exploded out of the starting blocks, and both should have been on the scoreboard after less than five minutes.

Firstly Bohemian’s striker Georgie Kelly found himself one on one with Ed McGinty, but could only poke his strike at the Sligo Rovers keeper from short range.

Those present barely had time to draw breath before Sligo missed a great chance of their own. After a quick break, Leaving Cert student Johnny Kenny gathered a loose ball, but couldn’t direct his close-range effort past Bohs goalie James Talbot.

This game continued frantically, but Sligo gradually wrestled control of proceedings, and took a deserved lead after half an hour.

Romeo Parkes, who terrorised the Gypsies defence in the opening half, latched onto a through ball. He seemed to have squandered the chance to shoot, but showed great composure to pick out Jordan Gibson.

Gibson unleashed a rocket of a volley to give the away side the first goal of this tie. The Westerners bossed the rest of the half and looked to be comfortably in charge at the break.

If Keith Long was looking for an instant response from his charges after half-time he certainly got it.

Less than 90 seconds into the half, Liam Burt collected a pass on the edge of the Sligo box and sent a thunderbolt of a shot flying into the top corner from 25 yards to draw his side level.

Buoyed by Burt’s goal Bohemians grew into the game, and controlled possession for long periods of the second period.

They had an excellent chance to grab the lead midway through the half, as the ball fell kindly to Keith Ward inside the box, but with only a defender on the line, he couldn’t hit the target.

The Gypsies were left to rue their missed chances, as with just less than 20 minutes remaining Sligo substitute Adam Byrne coolly tapped home a cross, from Kenny to give the visitors the lead.

Rovers were then able to seal their win with three minutes of normal time remaining, as Bolger picked out an unmarked David Cawley 16 yards out from the Bohemians goals, who spun and fired a rocket of a shot into the top corner.

This win sends Sligo to second in the table where they are behind Shamrock Rovers only on alphabetical difference, while Bohemians remain in sixth.