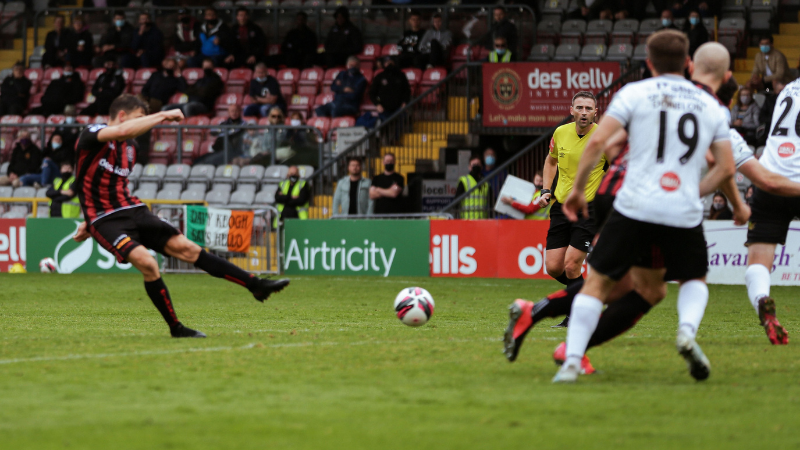 Bohemians bounced back from their Europa Conference League exit as Sligo Rovers losing streak continued, in this 1-0 win for the hosts in the Premier Division.

A cautious start for both sides with neither team creating a clear-cut chance in the opening quarter of the game with Bohemians with the best opportunity after Niall Morahan fouled Georgie Kelly on the edge of his own box.

Sligo grew into the ascendancy as the game progressed with Banks, Gibson, Mahon and Parkes working the hosts back line.

The Dublin side's best chance came when Devoy produced a little bit of magic on the halfway line finding Breslin who drove forward before crossing for Tierney who smashed the ball high over Ed McGintys goal.

It became end to end as the game grew on with both sides having spells of possession and a host of chances.

A switch by Bohemian's manager Keith Long of Tierney, Kelly and Devoy caused problems for the westerners with Garry Buckley and Regan Donelon but giving away free kicks in dangerous areas under little pressure, the latter receiving a booking for his indiscretion.

Bohemians finished the half strong with a number of chances as Liam Burt forced McGinty into making a big save to keep the sides level at the break.

Sligo started the second half on the front foot with a couple of quick-fire chances. This pressure didn’t last long as Bohs grew into the game forcing the visitors back four and goalkeeper McGinty to put their bodies on the line.

The breakthrough came when the ball fell to Captain Keith Buckley on the edge of the Sligo box, a little twist and shifting the ball to his left foot unleashing a thunderous strike through a crowded area, catching McGinty off guard.

Bohs went in search of a quick second, however Mahon and McGinty put their bodies on the line to keep the Bit O’Red in the game.

Liam Buckley threw everything he could at the Northsiders making a triple substitution and it almost came off as Johnny Kenny was instrumental in the buildup to a David Cawley effort which went just over the bar.

Bohemians saw out the game winning a number of free kicks and corners forcing Sligo netminder McGinty to work hard in the dying minutes.

With six losses on the trot Sligo host Derry City next who are now unbeaten in their last four on Saturday evening at the Showgrounds. The Bohs however have to wait for the Dublin derby as Shamrock Rovers visit Dalymount in two weeks for their second round FAI Cup match.