Derry City remain in touch of Rovers with win in Richmond 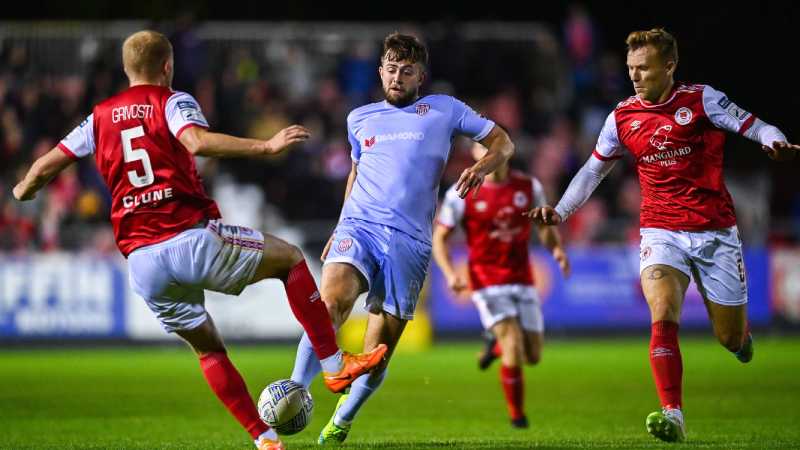 The result leaves the Candystripes two points behind leaders Shamrock Rovers who travel to Sligo tomorrow.

The substitute netted with what was his first touch of the game and the result leaves the Candystripes two points behind leaders Shamrock Rovers who travel to Sligo tomorrow.

Derry came flying out of the traps with Michael Duffy at the heart of everything good from the visitors. The winger found himself in good positions on numerous occasions testing Saints goalkeeper Danny Rogers.

The home side struggled in patches throughout the first half but, went closest when Sam Curtis had a point-blank header saved by Brian Maher before a goal mouth scramble resulted in a free out for the away side.

Numerous tasty challenges from both sides resulted in yellow cards for Jamie Lennon and Cameron Dummigan. Will Patching had a good effort from a free kick pushed away by Rogers who had a strong first half, as did captain Patrick McEleney.

The biggest problem for Pat’s was managing to keep hold of the ball as soon as it hit the forward line. Eoin Doyle lost possession throughout the half with Serge Atakayi struggling to make a real impact.

The hosts started the second half in much better fashion. They created many corners but failed to really test Maher.

The game flipped on its head on the 70th minute mark when Derry substitute Cian Kavanagh unleashed a venomous strike with his first touch from outside the penalty area into the far corner leaving Rogers helpless. This was moments before Chris Forrester had a penalty claim waved away for the hosts.

Pat’s almost responded straight away when Chris Forrester had an effort that cannoned off the post. Following a flurry of substitutes from both sides, the hosts struggled to create anything clear cut and the visitors held out for a massive three points.

In the closing stages, Ryan Graydon was given his marching orders when he received a two yellows in a minute. First, a tackle on O’Reilly followed by multiple verbal’s, and head-to-heads with Chris Forrester who was also sent off.