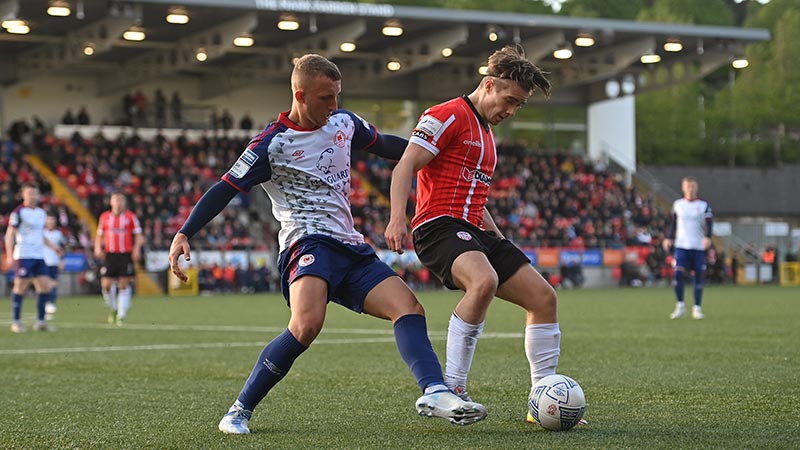 Derry City were held to a goalless draw by St Patrick’s Athletic at Brandywell. Despite dominating possession, the hosts couldn’t find a way through a resilient and well-organised Pats team.

Patrick McEleney struck the post from distance while Jamie McGonigle was a frequent threat to Joseph Anang’s goal. Pats though took a hard-earned point.

Looking to bounce back from their lacklustre draw with Bohemians on Friday night, Derry made two alterations to their starting XI bringing in Daniel Lafferty and Joe Thomson.

And it was Lafferty who had the first big chance, Joseph Anang tipping his header over. Derry was dominating possession and posed a frequent threat through Will Patching, Jamie McGonigle and ex Pats player, Matty Smith. McGonigle hit an airshot before Brandon Kavanagh skedaddled into the area only to shoot well over.

Patching was shooting on sight, but the midfielder couldn’t add to his tally of seven league goals so far this season. Cameron Dummigan’s incisive pass from defence sent McGonigle in on the right of the area and he drew a smart save from Anang. St Pats had their best spell of possession before the interval but didn’t pose an attacking threat.

Derry’s domination continued into the second half, McGonigle twice going close and a well-worked move which ended in Dummigan winning another corner. St Pats, despite being overran were defending resolutely and much improved from the 4-0 thumping by Derry last weekend.

Patrick McEleney hit the post after coming on but Derry’s best chance came on the counter. A St Pats corner was cleared, and Derry had a three on one opportunity.

Kavanagh played in McGonigle, and his tame shot was saved, McGonigle blazed over shortly afterwards. Pat’s best chance came in injury time, the substitutes Darragh Burns and Kyle Robinson combing only for Robinson to shoot straight at Brian Maher.

This is a damaging draw for Derry knocking them down into second place ahead of their crunch encounter with Shamrock Rovers. St Pats meanwhile achieved their redemption mission.