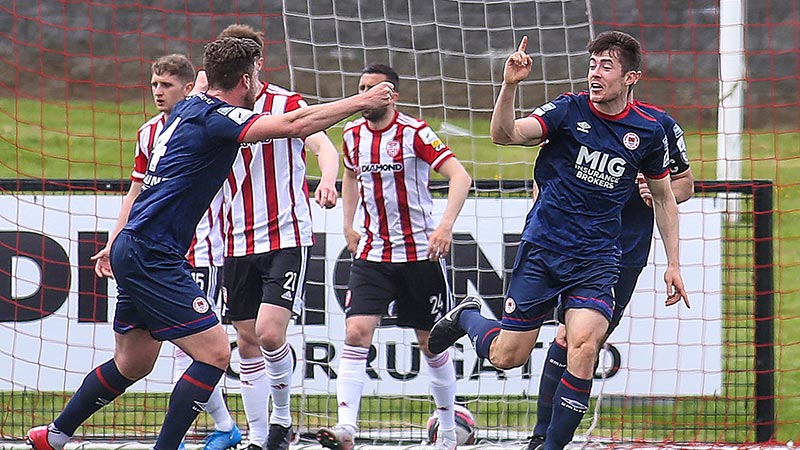 An 84th minute goal from Billy King for St. Patrick's Athletic, ensured a share of the spoils on a 2-all score-line against Derry City at the Ryan McBride Brandywell Stadium this evening.

Ronan Boyce and Joe Thomson scored for the home side, while along with King, Cork native Lee Desmond found the net for the Saints.

This draw has resulted in a scenario with heavier consequences for the visitors, who lost the opportunity to edge closer to the top, with the two top-placed sides of Shamrock Rovers and Sligo Rovers coming face-to-face in the 13th round of fixtures of the Premier Division later this evening.

It would be expected from Stephen O’Donnell’s group to come forward looking to taking advantage of the clash running in Tallaght. Pats came up with an encouraging start enjoying a spell of possession and constantly pressing high after losing the ball.

The first 20 minutes vanished with no real chances for either side, and with Derry trying to contain the opponent’s intentions to get the lead goal. Their system crashed two minutes later, in a sequence of a corner.

A perfect ball sent in by Mountney got flicked in by Desmond, a lead that took only four minutes to be neutralised.
Derry came back on level terms also from a corner, as a bouncing ball in Jaros box went in deflected by Ronan Boyce.

The two sudden changes in the score ensured the game was now livelier. Robbie Benson came up with a massive opportunity to beat Nathan Gartside as he saw the ball go off after clipping the top of the crossbar.

Eoin Toal came very close to send in the 2-1 for the Candystripes on the other side with a free header, but Vitezslav Jaros pushed the decisions for the second half.

Forrester flashed off a good opportunity shortly after the break, but that was it for the Dublin-based side until Joe Thomson’s goal in the 69th minute.

Resulting once again from a corner, the Scottish midfielder sent it a brilliant strike from the edge of the box leaving no chances for Jaros.

The need for points brought Pat’s up high pressing with all three lines, and ultimately the second equaliser of the night got confirmed through Billy King, O’Donnell’s amulet in the final embers for the second time this season, headed in a magnificent cross sent in by the substitute Ben McCormack.